Election Night and Blackouts in Argentina 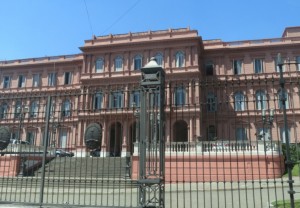 We’ve been asked from time to time how it is to be so far from home for so long. Truth be told, we haven’t spent a lot of time dwelling on what we miss about the states. New fall TV shows have probably already come and gone, I didn’t catch a single World Series game for the first time since I can remember and I stopped checking football scores a few weeks ago. If we hadn’t met up with our friends in September who brought dispatches of American culture, we might still not know what Gangman Style is. (Yet there is no escaping One Direction or Maroon 5 no matter where you are in the world.) To be fair, we’re only abroad for a short time compared to other world travelers and our attention has been mostly dedicated to full days of exploring new surroundings. But there is one distinctly American event we’ve had circled on our calendar for a long time: election night. That was one we weren’t going to miss.

Cobertura Electoral! The slightly harder to understand CNN coverage in our room

As we planned to watch the election results, we discovered that the cable selection in our hotel room did not include a single news channel in English. No problem: we settled down on the couch in the hotel lobby, asked if they could throw CNN on the giant TV and settled in for the evening. Since the Argentina time zone is currently two hours ahead of the east coast, the real fun didn’t start until after 9:00 PM. Before that, it was a lot of John King playing with that stupid Magic Wall and hearing reporters repeatedly use somewhat meaningless buzz words like “bellweather.” I have a clinical case of aggressively flipping channels, so it took some patience to get used to watching only CNN all evening.

While nervously watching each update, we broke into a bottle of wine. Brooke and I figured that no matter what happened over the course of the evening, at least we had a tasty bottle of wine from Mendoza to share. As we watched state after state go for one candidate or the other, we met a variety of people as they walked through the lobby and checked in on the results. An excited, if not slightly drunk, Argentine woman who had just come from a Tango class wanted to tell us all about the Mar Del Plata region. The lesson there is that our Spanish is exponentially worse when trying to communicate with someone who rambles and is slurring their words. Before long, the network made the call and announced that Obama has secured another term. There was much rejoicing and relief that the seemingly endless campaign was over. It all made for a memorable, late night in Buenos Aires during which I’ve probably watched more CNN then I ever have in my life. By the end of the evening, I felt like Anderson Cooper and Wolf Blitzer had become close, close friends. It would have been nice if Romney would have delivered his concession speech some time before 3:00 AM our time, but what can you do.

In order to make our way to Mar Del Plata and ensure we would’t be on an overnight bus on election night, we landed back in Buenos Aires for a couple of days. Hotels.com found us a great deal at a new, boutique hotel near the city of town called the Lennox Hotel. Out of our three hotel stays in B.A, I would strongly recommend this joint for anyone rolling through town. When I stop to think about how many hotel rooms we’ve seen on this trip, it kinda makes my head spin. But the Lennox Hotel was the epitome of cozy; the room even came with a kitchenette. The only addition that would have made the stay a bit sweeter would have been a washer and dryer. One universal truth of traveling around the world is that we’re always on the lookout for a place to wash and dry our clothes. Half the time it feels like our luggage is only serving to haul dirty clothes around the world. To mix up on our dining options and satisfy a craving that Brooke’s been harboring since Munich, we jumped through some hoops to secure some Argentine style Chinese delivery. I’m certain the Buenos Aires has some quality Chinese, we just didn’t find it that night. The culinary silver lining was the next day when we stumbled across the city’s best pizzeria at Guerrin. Jackpot. It stands to reasons when you’ve been making pizza since 1932 and your restaurant is packed, you’re probably pretty good at what your’re doing.

The Pizza was twice as good as it looked

It ended up being fortuitous we grabbed lunch when we did. Late yesterday afternoon the city experienced a massive blackout that affected a huge chunk of the area. Since the season is just hitting late Spring way down here in South America, the thermometer has been reading hot and getting hotter. Three days of above average temperatures compared with an apparently shaky electrical infrastructure knocked out the power for as far as I could see. Sometimes crossing the streets in Buenos Aires can be challenging enough when the traffic lights ARE working. But with everything dark in the middle of rush hour, it was a small slice of chaos. Things were particularly a mess on the exceptionally wide, famed 9 De Julio Avenue. Turns out that traffic doesn’t move very well across 18 lanes with no stop lights. The more I walked around, the more I got the feeling that this was a somewhat regular occurence. Bodega owners sat in darkened, small storefronts looking bored and annoyed while at nearby cafe patrons downed cold drinks while they still could. The clerk at our hotel pointed out that this was the “first blackout of the spring” and conceded that there might be several more when the heat of December comes about. Luckily, the power was back on for most of the city by late evening so Brooke and I could get back to the important focus of the day: not doing much of anything.

One thought on “Election Night and Blackouts in Argentina”