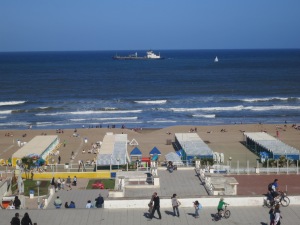 Good morning again from beautiful Mar Del Plata, Argentina! We could rave at length about the endless amount of great features of this beautiful seaside city. But one thing particularly worth noting is just how relaxing it has been. Our time in this rented apartment has given us some of the best sleep we’ve gotten on this trip. Ranks way above the unbearable discomfort of the Reino Inn in Hiroshima and about on par with our time at the Hanoi Moment in Vietnam. All kinds of sleep from sun drenched naps on the couch with a subtle sea breeze or a long night in an oh-so-comfortable bed punctuated with the sound of the waves crashing on the rocks fourteen stories below. Probably sounds odd that I’m boasting about how rested we are, but we’ve spent so much of our travels up early, running around all day and then worn out by nightfall, that this is a good way to wind down the trip. 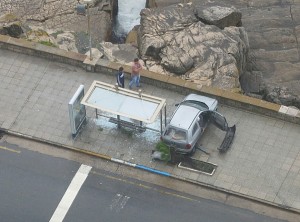 All of this makes it even more striking that we were woken yesterday morning by the booming sound of shattering glass. A quick look out the window confirmed that a car had sped directly into the glass bus stop directly across the street. No one was hurt, but that’s a hell of a way to start your day. Later when walking along the main road, we observed that a highly suspicious number of bus stops no longer seemed to have their glass siding. Driving and, for that matter, riding in cars down here tends to be a guaranteed white knuckle adventure. Given the examples of bad driving we’ve seen again and again down here, I’m going to start referring to waking up in that manner as an Argentine Alarm Clock.

Reckless motoring aside, it’s not hard to see why Mar Del Plata is a booming vacation spot during the summer. Even though its early in the season, the main walkway along the beach is teeming with joggers, casual walkers, groups sipping maté, rollerbladers and more. I’ll make the bold leap and say that you could draw comparisons between this town and parts of Florida. Seaside walks, hundreds of hotels and compact blocks loaded with shops, storefronts and charming homes. We’ve had a couple of surprisingly windy days and nights, so the beaches are somewhat empty but there is a steady crowd of aspiring surfers just off the coast. As Brooke mentioned, the view from our window brings us the ocean falling over the horizon during the day, the unfamiliar stars of the southern window at night and everything ranging from large group of bicyclists to racing cars a la Fast and The Furious on the street below. It’s been fun just to watch out the window. 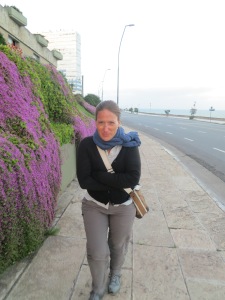 Brooke and I have also been using some of this time prepping for re-entry back into a day-to-day life in the states and, more importantly, taking some early steps to settle into our new city of Louisville, KY. There is much to be done and much of it is exciting. Its easy to frame our next steps as a completely new type of adventure. In upcoming weeks, we need to find a car, a place to live and, probably most importantly, jobs. Between a slew of e-mails to potential Jefferson County school employers and some buffering and polishing of LinkedIn profiles, we feel proud of the head start we’ve gotten. Never under estimate the power of a strong WiFi connection. We plan to hit the ground running when we get back, but a little work in advance goes a long way. Once again, having our ASUS Tablet and keyboard on this trip has been a lifesaver. 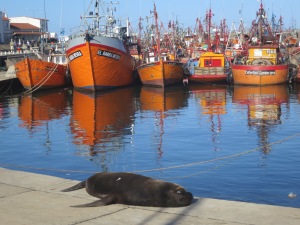 But don’t be fooled. We’re spending a lot of time enjoying all the Mar Del Plata has to offer. This city and weather combine to provide the perfect atmosphere for long walks. We’ve headed north, south and west outside our front door and found worthwhile treks in each direction. Throughout this trip, I’ve always enjoyed venturing down a new street for the first time. I dig the initial voyage combined with the exciting philosophy of “who knows what we’ll see!” Occasionally, you discover zip but other times you see Sea Lions. As was the case yesterday when we walked down to the main port. Sure enough, at the edge of the docks mingling among fishing boats, was a large pack of Sea Lions. A few were somewhat active almost clamoring for attention from camera-toting human guests, while others were just lazy bastards. If I didn’t know better, I would presume I was looking at two dozen beached Sea Lions. It was quite cool to see and hear these giant creatures up close; when they “bark”, they actually sound a bit like lions. Fun fact: Argentines calls Sea Lions “Lobos Del Mar” which actually translates as “WOLVES of the sea.” Along with serving as a vacation sport, this city has a very active port including scores of small fishing boats. I don’t think Brooke ever has to worry about losing me to the sea; days on a fishing boat looks like a rough way to make a living.  After a long walk out, we ended with a small victory as a local bus and the equivalent of 75 cents gave us a ride back directly to the aforementioned smashed bus stop just outside our building. 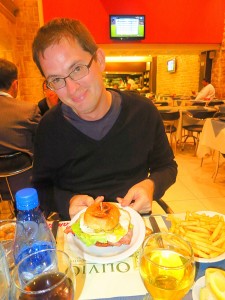 On another walk, we discovered the closest thing to a diner that we’ve seen in a long time. Manolo restaurant is apparently a Mar Del Plata institution and was recommended highly by our Air BnB host. Complete with massive menu, indifferent waiters and reasonable prices, it was a place where the selection is endless want but it’s unlikely that any of it is going to be outstanding. Following the “When in Rome” ideology, I ordered the house chicken burger which came with a ham, cheese, egg, olives, tomatoes and lettuce. Oh my. On the taste scale, it fell somewhere between interesting and delicious. Also, since every single person in the joint had at least one churro on the plate in front of them, I ordered one as well. I’m sure its part of a relatively small universe, but that was hands down the best churro I’ve had in my life.

Brooke and I have also spent some time in front of the boob tube. The best part? The commercials. I leave you with this strange, gem that had us bewildered when we first saw it. I’ve watched it 15 times since but I’m still scratching my head. Trust us, this is worth clicking on link to see this strange mishmash: 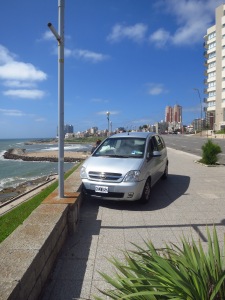 Another car that ran off the road. Keep in mind this is different than the one that ran into the bus stop- same day, 2 KM down the road. Yikes. 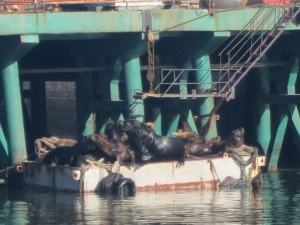 Sea Lions hanging out under the pier. There were tons of them! They sometimes fought and they reeked. 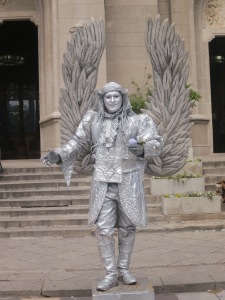 We’ve seen tons of these “Living Statues” street performers all around the world. This Angel outside a church in Mar Del Plata was hands down the best. He went all out! Click to enlarge to see the detail. 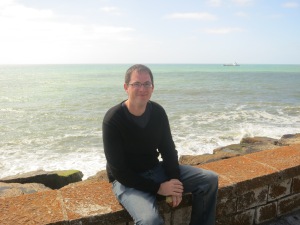