I begin this update from Japan by asking for your forgiveness in advance. This is going to be a long blog post. There is just no way around it. Our second full day in Japan was so full and amazing, that we have a lot to share. Today was our designated Tokyo day and the entire day was spent exploring just a bit of this mammoth, expansive city. Even had an encounter with a giant Pikachu. We spent the better part of 13 hours absorbing Japanese culture from district to district. Lucky for us, you can’t really go wrong in Tokyo. With a town this gigantic, just about every neighborhood offers something capitivating, interesting and worth mentioning in a ridiculously long blog post. 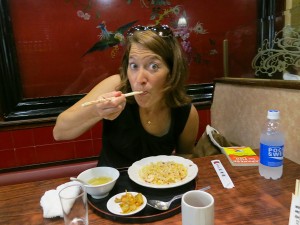 We started our day in the well-visited district of Asakusa which is likely best known for it’s Senso-Ji temple complex and hundreds of tiny, cute shops in Nakamise-Dori. Once off the train, we grabbed lunch at a beckoning seemingly-Japanese restaraunt. The language barrier struck again because I’m pretty sure that we might have actually eaten at a Chinese restaurant. The jury is still out. We had pangs of regrets later on because we passed dozens of food booths that we’re hawking delicious smelling, exotic street meat. We strolled from shop to shop, investigating endless keepsake and souvenier options (we’re overdue for some new chopsticks and Brooke thinks I would look good in a Kimono) and enjoyed the sites despite the scorching sun. We even saw some interesting plaques that gave us some handy pointers on how to Ninja Proof our new home in Louisville.

We finally happened across the giant, bustling temple complex. Although rebuilt in the 1960’s, Senso-Ji had an impressive collection of gates, temples and pagodas. We even took part in some rituals when we threw 100 yen in the well, said a prayer, and received a fortune based on the Japanese character for luck. There were also rituals involving burning incense and washing with temple water that were popular among the visitors. The temple complex, complete with giant lantern that could replace Lady Liberty’s torch, was a great visit.

From Asakusa, we set our sites on the newly-completed Sky Tree Town tower. Opened this past spring, Sky Tree is…well…a giant tower. Impressively tall, notably modern and complete with an entertainment complex that includes an aquarium, planetarium and crazy toy store that looks like a Tim Burton dream (this is where I saw Pikachu). The tower was packed with excited, massive crowds to fill every space. The cost to get to the top of to the tower was enough alone to dissuade us, but if that didn’t do it, the ridiculously long line would have.

Our last stop of the night, was in the neighborhood of Shinjuku – with 3 million commuters going through here each day, it is home of one of the city’s largest train stations. The hustle and bustle of Shinjuku at 10:30 PM on a Friday night makes Grand Central Station look like a backwater bus stop. Once again, we learned that just taking that extra step around the corner will take you all kinds of places. We looked down a narrow and appealing alley and ended up in what they call a Yakitori style restaurant. We learned later that the alley has been called both “Memory Lane” and “Piss Alley” – which should tell you something right there. After being beckoned into a itty-bitty restaurant smack-dab against a dozen clones, we were ushered upstairs to an even smaller dining area that barely held eight people.

This was a dinner like no other made up of kebabs and long sitting crowds. You know you’re having an authentic experience when the other guests are so fascinated by your presence that they ask to take pictures of YOU! The various chicken kebabs we’re tasty and “oyshikata.” When we ordered beer, we received a “White Hoppy” and “Black Hoppy” in a bottle. The waitress, in broken English, suggested we mix it with at least 1 to 2 parts water that she had brought to the table. I loaded my glass with this water, poured in the beer and sampled. Hilarity (and a touch of drunkenness) ensued when it turns out that the water….was Sake. Let’s just say it was a much stronger “beer” than I was expecting. On the long train ride home in the middle of a beautiful summer night, Brooke and I reflected that the Yakitori were shady enough to be fun, but not shady enough to make you nervous.

Today was the epitome of what we want out of our Round The World trip. Sensational new discoveries and unexpected cultural experiences. Just a great day! And it is only our second day in Japan! We’re finding our way around with greater ease by the hour. The endless amount of well marked signs is a big help. Although it’s an interesting puzzle trying to find a pattern of why some signs are in English and why some have zero English. As a bonus, we’ve even able to master a few handy phrases. As we shut down for the evening, I asked Brooke, “What will see tomorrow?” Her answer: “Everything!” Tomorrow: Kyoto!

Gates welcoming us to shopping/temples in Tokyo

Table for 10? How about restaurant for 10! I look like a giant in this place…

7 thoughts on “Tokyo, Towers, Temples and Back Alley Restaraunts”