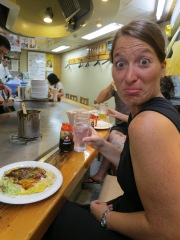 We’ve made our way on the Shinkansen from Kyoto to Hiroshima leaving behind Shoguns, Geishas, Kimonos and Pagodas and ready to see a new city. It was a quick two hour ride on the Shinkansen. After arriving in the early evening, we set out to grab some dinner. Very quickly, we discovered Okonomiyaki – Hiroshima’s signature dish. Okonomiyaki is best described as a noodle pancake loaded with cabbage, sprouts, egg, meat and more – all cooked on a griddle. Locals take pride in their Okonomiyaki and it is as ubiquitous as chili is to Cincinnati or deep dish style pizza is to Chicago. The verdict? Inexpensive and tasty! Can’t wait to go back tomorrow for another round before we head out of town! The very friendly owner of the particular restaurant we visited was insistent on giving me his card. You can visit his site here.

Hiroshima is a lively, colorful city that uses street cars of all sizes, models and years as their signature public transportation. Running up and down the major streets, the street cars are the main way we’ve been getting across town. After a relaxing night at Hiroshima’s wonderful Hana Hostel, we made our way to Peace Memorial Park and The Peace Memorial Museum – part of a whole complex dedicated to the memory of the atomic bombing of Hiroshima and to creating lasting worldwide peace..

The museum and park certainly qualify as “must visits” in Japan. The nearly-free museum is well done, informative and paints a complex picture of the really widespread, horrific destruction done by the atomic bomb. It was interesting and informative and solemn, but structured to teach and share to make sure that all remember. Brooke and I walked away glad we took the time to tour the museum and grounds surrounding this incredibly important, watershed event in human history. It is also the first time we’ve really come to understand the specific impact of an atomic attack on a specific place.

The museum has such a tactile component with archives full of items from the blast that you can touch and hold. Showing these human, personal items helps to establishes a more intimate connection with what happened here 67 years ago. One eye-catching exhibit was the stopped wristwatch reflecting the exact minute that the bomb went off- it is literally a snapshot of time. The personal stories and archived items, and especially the photographs from the city after the bombing are unsettling, but that’s to be expected and kind of the point. 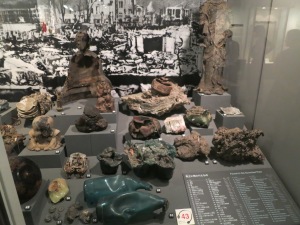 We found it really interesting how the current generation of Hiroshima locals really shoulder the city’s legacy from the past. The city is a rebuilt place, but they are urging people to never forget what has happened here. The museum has a clear focus on their dedication to peace and ending nuclear proliferation. In fact, the sitting mayors of Hiroshima have sent a letter of protest to a country each time their nation has tested an atomic weapon over the last forty years. Copies of these letters fill up two or three full walls within the museum. We also applaud their mulit-lingual exhibits that show the desire to spread peace across all peoples. I get that this is supposed to be a message of warning, but it does sort of make the future looks grim and bleak. I saw a sign on the way out indicating that this should be a “warning to future generations.” Indeed.

After leaving the museum, meandering through Peace Park was its own striking experience because you’re standing in the near exact bombing spot that you had just studied inside. It’s all preserved green space now with the cenotaph, flame of peace and the Childen’s Peace Monument which was built in a response to the well-known story of Sadako Sasaki- the cancer stricken girl who made a 1,000 paper cranes. Is is an astonishing tale that’s simply heartbreaking. The most notable building was the so called “A-dome” structure: the shell of a building close to the center of the bombing that was one of the very few to remain intact.

We walked away from the area and took some time to compose our thoughts and consider our experiences. Hiroshima is in no way a depressing city and its desire to be focused on peace rather than tragedy is quite clear. We understand why some people may avoid visiting this city, but we would definitely try to convince them otherwise. No matter what your political views or beliefs about nuclear weapons, the story of Hiroshima and its people deserve our attention and remembrance. There is more to our visit to Hiroshima which is a bit more uplifting and fun, but we will tell you all about that tomorrow. 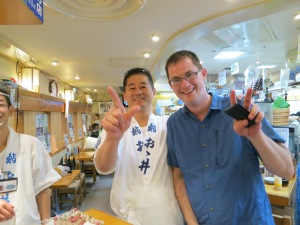 Phil and the owner of the Okonomiyaki joint

Another view of the really striking A-dome. It’s been preserved to look exactly as it did right after 8:15 AM on August 6th, 1945. Everything else around it was just obliterated.