Out of Japan and into China! We landed last night, negotiated another new subway system to our hotel and checked into the lovely Guangdong Dasha Hotel near the heart of Guangzhou. We’re back to driving on the right hand side of the road, but it looks like we’re done with drinking water out of the tap for a while.

Our biggest impression after a day in Guangzhou? It’s hard here. We felt more like foreigners than we ever have in our lives. There is such little English spoken or written on any signs in Guangzhou. For the first time, the langauge barrier became a hinderance and a real issue. A huge chunk of our communication today, from directions to asking for a to-go box for food, was done in half-sentences and pantomime. Relatively simple questions such as trying to get a suggestion for dinner at the front desk of the hotel, turned into a painstaking process involving four employees. While everything was a bit different in Japan, we never had these kind of issues. There are far less Westeners here in Guangzhou, that’s for sure. We’ve been getting a lot of stares that come, we think, mostly out of curiosity. Still, we’d like to learn the phrase “What are ya lookin’ at?!” or “Do I have something in my teeth?” So many stares. It was really an eye opening day.

Besides the staring, the general behavior of the people here has a much different feel. Unlike the polite, patient crowds we saw throughout Japan, Guangzhou has been full of Shovey McShoversons. People will not hesitate to shoulder past you to get on a train or to get in front of you in line. This same sense of urgency can be seen in the drivers, too. When it comes to street traffic, our primary goal quickly became to avoid getting flattened by a speeding taxi or bus. The drivers and pedestrians in this town seemed to be locked in an epic city-wide game of chicken. It seems cars definitely have the right-of-way and we were doing some serious heads-up walking when we crossed the street.

Our other immediate impression of Guangzhou is how friggin’ inexpensive everything was. A full dinner ran us about $15, taxi rides came to around $3 and a subway ride was about 75 cents…for two people! We took advantage by taking the morning to pursue stores (they love their malls in Asia) on the Beijing Road Shopping district. Endless deals complimented endless shops. After walking the downtown streets, seeing the colors and sites and a really, really difficult experience attempting to by boat tickets, we needed a break. So, we went to the one place where we knew everyone in the room would speak English – our comfy hotel room. We grabbed some beers and toasted to humility, to hubris and to travel in general.

Although there have been some challenges today, Guangzhou itself has been very easy to navigate and a breeze to get around. The modern subway runs quickly and cheaply with a lot of innovative, high-tech features. Some of the stations look like they haven’t been open a month and new lines are being added each year. In fact, there was construction everywhere. Cranes on the horizon as far as they eye could see. There is a splattering of high-rise construction around every corner. For every recently constructed high-rise, there was another one half-built. We read that in 2007, 25% of the world’s construction cranes were in China and that seems to still hold true in Guangzhou.

After the best beef and broccoli I’ve ever had, our day ended on a particular high note with a stellar night cruise down the Pearl River. A popular activity, river boats cruise up and down the Pearl River through the center of town. The smooth hour-long ride allows you to see the illuminating, dazzling lights from just about every building – new and old. Every structure from stadium, to bridge, to apartment complex gets in on the act. Most spectacular is the Guangzhou tower. So, yeah, it’s about the 5th tower we’ve seen since arriving in Asia, but it really is the best one we’ve seen yet. It was the highlight of our day and showcased Guangzhou’s most signature feature. 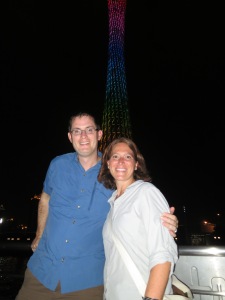 It was important that we ended our day with the river cruise, because our general feeling for today was frustration. We wish we spoke even a little Cantonese, but we barely know how to say hello. Even at our lovely hotel, miscommunication abounds. With that, we’re taking our 36 hours in Guangzhou and heading out of town. We are amazed when we think that we still have SO much trip left! We have lots to look forward to. Including a bus ride to Hong Kong tomorrow. At least, we think we’re heading on a bus to Hong Kong tomorrow. With all of the language challenges we’ve had today, we’re never 100% sure on what we’re doing next!

4 thoughts on “36 Hours in Guangzhou”