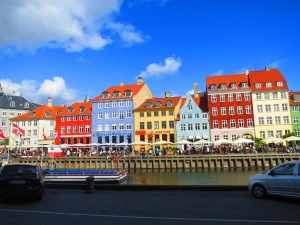 There is no mistaking it…we are NOT in Asia anymore.  From the moment we stepped off the plane and every moment since then, it has been quite clear we are in an old European city.  But even more than that, it is clear we are in Denmark.  Everywhere we look there are beautiful blondes riding bicycles (very politely, I might add).

After a short morning run, we truly began to explore Copenhagen.  Going off recommendations, we started our day with a canal cruise.  This hour-long cruise through the winding canal system was a great way for us to see several different areas of the city so we could then determine what we really wanted to visit. When the tour-guide began speaking German, we were afraid we had gotten on the wrong boat.  We checked to make sure the tour would be in English, but she definitely wasn’t speaking English.  As it turned out, she gave all the information in three different languages–Danish, German and English.  We were relieved we would be able to understand, and again felt awful about the fact that we seem to be the only people in the world who only speak one language.  As for the tour, we especially love looking at the architecture of the city.  They really take pride in their old buildings, some of them date back hundreds of years.  However, they also have a lot of new construction, including an opera house right on the water which was built less than ten years ago.  Because of this, the newer buildings really have to be spectacular so they can stand the test of time.  Unlike Tokyo or Hong Kong, there is no race for the tallest towers or highest buildings.  In fact, there are very few skyscrapers in sight.  As we walked the streets, we kept saying that it all looks so European–old, grand, brick buildings lining the street, some with huge squares in front where people gather.  It is exactly what we pictured before we got here.

The riverboat cruise inspired us to head to the National Museum so we could understand a bit more about Danish history.  As we walked over there, we saw a crowd gathered outside an old church.  Today was Flag Day or Soldier’s Day, so there were lots of celebrations and officials about town.  There were clearly secret service types outside of the church, so we thought we might glimpse the prime minister.  As it turns out, they were waiting for the Queen (Queen Margaret) to come out.  Apparently this was her private church and she was inside.  The royal family here seems to be fairly accessible to the people.  Of course, they are guarded, but people can walk the palace grounds and the royals are often spotted about town.  We waited for a bit to see Queen Margaret, but as it seemed like she wasn’t coming out anytime soon, we continued on through the Parliament grounds and over to the museum.

The National Museum (Nationalmuseet) has a completely free admission and is rather large, consisting of exhibits from the beginning of time through the year 2000.  That seemed a bit overwhelming to us, so we started with Danish pre-history through the Viking era.  Intermingled with the exhibits discussing burial rituals and ancient tools were art pieces that provide a “modern interpretation” of history.  Clearly the Lego version of the Deathstar from Star Wars was a piece of art.  Unfortunately, they were not all so clear and we found ourselves incredibly confused about what was real and what was art.  We questioned the exhibit showing the grave of the “bog witch” who boiled diseased children creating a dense fog over the bog. However, it was the mermaid that really made us confused.  Laying in a case are the bones of a mermaid with the story of a man who dug her up while tilling his farmland.  We looked at each other, completely unsure of what was happening.  We know mermaids aren’t real, but was the story real?  Had someone placed bones together to make it look like a mermaid and trick the farmer?  We backtracked down to the information desk to figure out what was happening.  The woman working at the museum was not at all surprised by our questions and confusion.  She cleared it up…kind of.  Bog witch–fake.  Mermaid–fake.  However, they are next to other very real graves which are genuine museum exhibits.  She told us these artists are “interpreting history in a modern way to push the limits of our thinking.”  I think that is complete garbage and they should say instead they are creating mythology to go along with the history.  It is far too confusing to figure out what is real and what is made up.  If a seven year old kid walked through there, he would walk out thinking Mermaids are real.  I don’t think that’s what they are going for.

After feeling completely confused and like I had just wasted an hour, we scrapped Danish prehistory and learned about more modern times.  It was interesting to learn of their history with Sweden and Norway as well as the other countries in the region.  There is so much history and it was all jammed so closely together that it got to be a bit overwhelming and we found ourselves skimming through parts.  In more modern times, the history is quite similar to the America– Industrial revolution, child labor laws, women’s rights, etc.  With all of this culture and history under our belts, it was time to learn what Copenhagen was really all about and we figured the best way to do that was to find a good bar. 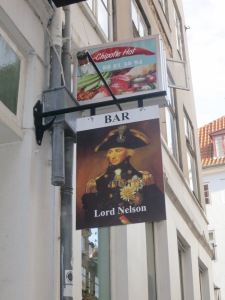 Amid the cutesy cafes and upscale bars in a rather touristy part of town, we managed to find Lord Nelson, a basement bar specializing in craft beer filled with locals and regulars.  Our friendly brother-sister bartending team, Morton and Ricki, were awesome.  Not only did they let us try every beer they had on tap, they  encouraged us to branch out our tastes and go with beers we might not normally drink.  We both enjoyed the Kiss Me Hardy, a delicious hoppy beer named after Lord Nelson’s final words to his First Officer.  Through this discussion of beer, we also learned a bit about Morton’s favorite places in Copenhagen and a little bit about life here.  We also talked for a long time with Perm, an older gentleman who has traveled the world and was excited to talk to us about all the different places he’s been.  We asked lots of questions about the relationship between Denmark and other countries and truly learned as much there as we did at the museum.  Lord Nelson is exactly the kind of bar we’ve been looking for and we were happy to spend a couple of hours resting after touring Copenhagen.

We managed to drag ourselves away from the bar so we could head to Tivoli, one of the oldest amusement parks in the world, known for its beautiful lights and gardens.  We know it for being a huge disappointment.  We had to pay to get in, which we figured since it is an amusement park.  However, we had to also pay to do anything inside.  Rides, restaurants, games–everything cost additional money.  We walked around, unimpressed, and left thinking we could have spent our money much more wisely.  Oh well.  We were tired and ready to head home anyway.

Our first day in Copenhagen was a roaring success and we can’t wait for tomorrow.  We plan to hit the Carlsberg Brewery, Christiana and eat lots of delicious pastries.  We look forward to sharing what we find!

Morton, our awesome bartender at Lord Nelson’s, showing off his tattoo from his time in the Queen’s military.

Here’s a bar right on the canal where boats can pull up to have a drink.

A typical example of the beautiful buildings that remind us we are in Europe.