Again, we apologize for the intermittent posting. Wi-fi is limited and absurdly expensive on the cruise ship, so we’re only able to post whilst at port.

Salutations from Tallinn, Estonia! As our epic Baltic Capitals cruise continues to sail across Northern Europe, we docked in Tallinn and spent the better part of today in Estonia’s biggest city situated smack dab on the coast. Our oh-so luxurious and comfortable boat was only in port from about 9:30 AM to 5:00 PM, so we endeavored to make the best use of our short time. Tallinn is yet another city that we knew virtually nothing about prior to visiting. Our trip has been extraordinary in helping us fill in these giant gaps of knowledge we have about a ton of places around the world like Estonia, Singapore, Vietnam, etc.

Tallinn is one of the smallest cities in one of the smallest countries that we’ve spent time in thus far. The entire nation has a population shy of two million. It doesn’t take long to discover that due to it’s small size and “favorable geographic location”, this is a country that has been invaded, occupied and controlled throughout its history by nearly every major European nation including Sweden, Denmark, Germany and, most recently and most notably, Russia. The more we see of Europe, the more it dawns on us how the history of these European nations is so intertwined. Estonian is the local language, but you won’t hear it much outside of the country. It’s unique to be in the midst of a language that only 1.5 million people speak among millions of Europeans.

A large part of Estonia’s history involves being resilient while fighting seemingly endless oppression by much larger nations. In fact, in the last 800 years, Estonia has only had 40 total years of true independence! And twenty of those years have been since 1991. That’s crazy to wrap your head around. The country continues to grow on its own two legs and recently joined the E.U. and converted to the Euro just two years ago. Our lunch bill had the price in both the old Estonian currency and in Euros since locals are still adjusting to the conversions. In some ways, Brooke and I were exploring an entirely new nation comprised of a centuries old culture and people. We’re seeing parts of the world in a changing time with some counties experiencing independence and peace only in recent years. Estonia has a remarkable story and it is a remarkable time to for us to visit.

Once again, the ever-present Hop-on Hop-off tour bus served us incredibly well. We’re on the cusp of writing personal endorsements for these buses.  When we only have a short time to dig in and see a city, these double-deckers are perfect. For just ten Euro a pop, we enjoyed a guided ride on two different lines covering a solid chunk of the city. Plus, the bus provided transportation to and from to the cruise port. We learned about the Estonian singing culture and their giant outdoor amphitheatre that can accommodate thousands of singers (Estonians apparently love to sing), Tallinn’s role in hosting water sports on the Baltic during the 1980 Moscow Olympics, and we got a good look at a scary looking seaside prison turned museum.

Since our Norwegian Sun was one of four, count ’em four, giant cruise boats clamoring for space in the port, our first sight in Old Town was tourists and more tourists. At first impressions, you might think that Tallinn’s main population is nothing more than confused looking middle-aged tourists with cameras and fanny packs. We explored old town for a bit which was made up mainly of beautiful old preserved buildings and churches and surrounded by an ancient wall that has large parts still in tact. Old Town itself has an authentic Medieval look and is quiet, sterile and only used now for historically preserved buildings, government buildings and souvenir shops. Wandering away from the crowds and down the hill, we ambled around the corner and we discovered this great Army-Navy Antique Store. The place was a wonderful mix of antique store and history museum with Soviet and Nazi era flags, metals, propoganda posters, busts of Lenin, Matchbooks and more. Just around the corner, the Estonian History museum was one of the best we’ve seen on this trip so far. The small but mighty museum included an exhibit on a recently merchant’s chest dating from 1350 which was unearthed from the Baltic Sea just last year.  The museum also has a very entertaining, tongue-in-cheek video that gives a colorful, brief informative history of the country. On top of all that, the museum has a bathroom that talks to you. I’m pretty sure the toilet was trying to teach me Estonian one word at a time.  It was a little creepy at first. 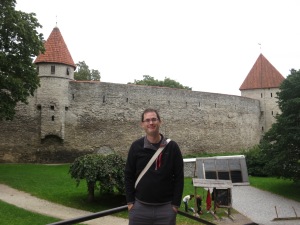 Around 5:00 PM, Brooke and I marched proudly back onto the boat satisfied with the job we had done. We hit the city hard and fast. Our reward? A quick history and taste of Estonia. Today was a good day: spending half the day exploring a brand new country in Estonia and the other half keeping busy on our giant boat. Speaking of our time on this massive rig, cruise living continues to treat us very well! We’re meeting friendly (mostly American) new faces around every new corner, kicking tail and taking names at trivia (particularly Name that Tune Movie Trivia) and we even managed to catch a Sunday Night NFL game which was pumped in live via Satellite late night in the Sports Bar. The food has been sensational in the categories of taste, availability and quantity. And running on the treadmill is a much more inspiring activity when the view from your window is the moving, open sea. Tonight was a delicious dinner with an ocean view in the main dining room, enjoying a live version of Deal or No Deal, watching a group of shipboard singers and dancers plow their way through Broadway Show tunes, and enjoying some more good luck in the Casino. Hmmm…is it too early to look into a fifteen day cruise? Next stop: St. Petersburg! 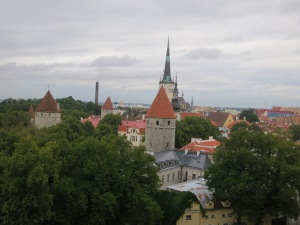 One last image of some of Old Town from high above. The big church in the background doubled as beacon for sailors and has burned down like five times.

Check it out! Spring Awakening is coming to Tallinn! (We think that’s what it says)

Watching some Sunday Afternoon Football (at 12:30 AM!) on the Norwegian Sun’s Sports Bar on Deck 12 with new friends. Never that far from home…

9 thoughts on “Stopping by Estonia!”