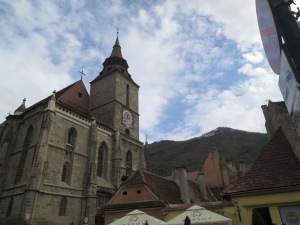 When we arrived in Romania, many people assumed we would be heading to Transylvania, a region north of Bucharest steeped in history and well known to Westerners for its role in Bram Stoker’s Dracula.  We had no solid plans upon arrival, so we figured we might as well grab the train and head to Brasov, a city in the central region of Transylvania in the foothills of the Carpathian Mountains.

There is much to do in the Transylvania region, but to really see it all we’d have to be here for at least a week and take our time going from castle to castle.  Instead, we have only a few days, so we decided to base our exploration in the town of Brasov.  Having human settlements which date back as far as the Neolithic age, it has a rich history.  We decided to start a little closer to modern times with the town’s best known landmark, the Black Church.  Built in the 15th century, this remarkable church got its current name after being badly burned in a fire which consumed most of the town in 1689.  It has been cleaned up to the point visitors might not even realize there was ever a fire except for the four blackened statues which have been preserved in their post-flame glory.  This church marks the end of Gothic architecture in the region and claims to be the largest Gothic cathedral between Eastern and Western Europe.  Originally a Catholic cathedral, it is now Lutheran and serves the small German community here in Brasov by holding all its services in German.  The 4,000-pipe organ is still played weekly for public concerts.  Most notably, this church hold the largest collection of Turkish rugs outside of Turkey.  These were gifts over couple hundred years and are now proudly cleaned, repaired, and on display for public viewing.

We found a few things about the church particularly interesting.  One is the painted pews which designated seats for different guilds.  There were seats for the weavers, tailors, hunters, etc. all shown through symbolic paintings on the pews (we were, once again, unable to take photos inside so we cannot show you).  However, there were only 3-4 seats for each, so only the “higher-ups” in these communities garnered a seat.  The low wage workers were sent to the galleries up above.  We were also very interested in the “Black Madonna” painting.  It is a portrait of Mary being given gifts for Jesus and being attended to by angels.  Her dress was originally blue, but after the fire it turned black, therefore it has been given the name “Black Madonna”.  We had a wonderful young guide who gave a strong tour with insights we would not have otherwise had. 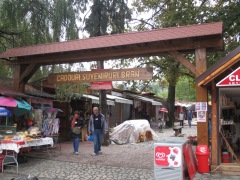 While there is more to see in Brasov (some of which we plan to do tomorrow) we decided to take this opportunity and head slightly south to Bran’s Castle.  Many people assume this castle was the inspiration for Bram Stoker’s Dracula.  Let me make something perfectly clear from the beginning–there is essentially NO CONNECTION!  There is the tiniest, most remote, slimmest chance that Dracula is based on Vlad the Impaler who has some miniscule connection to Bran’s castle, but the correlation is mostly created by people trying to drum up tourism.  Don’t get me wrong, the castle is awesome.  And Vlad the Impaler was awful.  But those two things aren’t really related.  Perhaps I’m getting ahead of myself…let me start from the beginning. 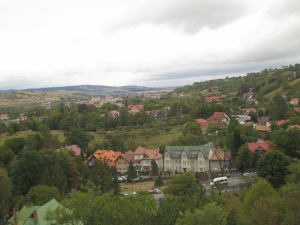 Bran is a fairly easy bus ride just 45 minutes south of Brasov.  As we pulled into town we could see Bran Castle sitting up in the hillside.  It looks rather small from the outside, but once inside it is actually quite cavernous and impressive.  Housing impressively creaky floors and drafty hallways, Bran Castle has a long history dating back to the 15th century.  It has had royal residents as recently as the late 1940’s and is one of the only castles we’ve been in that we could imagine living in.  Many of the original rooms have been refurbished to suit more modern living.  It has beautiful views and a fireplace in each room to help keep us warm–it was a chilly 48 degrees today so we kind of wish those fireplaces actually had wood burning in them!

There were two rooms dedicated to explaining the connection between Bram Stoker’s Dracula and Bran Castle.  Let me break it down for you–Vlad Dracul was a prince in Transylvania.  He had a son, Vlad the Impaler, who killed people by running a stake from – brace yourself – through their anus to their throat without hitting any vital organs thus producing a slow and painful death. He was also rumored to be ruthless and enjoy drinking blood–hence the connection to Dracula.  That’s about it. Dracula is a completely made up character by Bram Stoker.  We still aren’t sure what the actual connection is to this castle; Stoker never came close to visiting Romania.  It doesn’t really matter, though, because the castle is pretty cool all on its own.  The Dracula connection does make for some fun and kitschy souvenirs and a couple of haunted houses in the town center.

After our visit to Bran, we had planned to head to Rasnov to visit this cool fortress, but it was so cold and so rainy, we just couldn’t bring ourselves to get off the bus.  Instead, we warmed ourselves over some delicious Guinness at Deane’s Pub listening to a big band play some jazz and swing.  There’s something surreal about singing along to Sinatra’s New York, New York while sitting in a pub in Brasov, Romania.  On our way home we stopped off for a nightcap at For Sale, a cozy little bar whose walls are covered with the patrons’ business cards.  We had a drink, posted our business cards on the wall just for good measure, and now are attempting to warm up back in our room.  We think this weather must be unseasonably cold as the heat has not yet been turned on in our hotel.  (Oh well…it feels like we are back in our apartment in New York.)  Now, we plan our next steps.  We aren’t sure exactly what lies ahead, but after a little more exploration of Brasnov tomorrow, it looks like we are headed to Sofia, Bulgaria.  Wish us luck!

Creepy hidden staircase inside Bran Castle. I wouldn’t want to be in here for long! 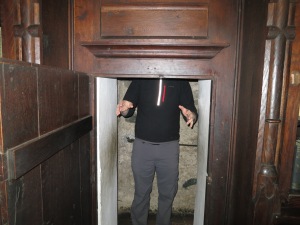 Phil isn’t really meant for the castle lifestyle–he is way too tall!

We thought this room actually looked like a room people would live in unlike so many of the cold, sterile rooms of the castle.

The inner courtyard at Bran Castle.

2 thoughts on “Beautiful Brasov and Bran!”