Greetings from Sofia! The overnight train from Bucharest pulled into the Bulgarian Capital City bright and early around 9:00 AM. Our private, if not incredibly old, train car granted us some sleep in between two separate hour-long border checks (groan – at one point, our conductor fell asleep after taking our passports. Hey, guy, we’re going to need those) and station stops where the train grinds to a sudden stop.  On the bright side, we woke up to some stunning views of Bulgarian mountains.

After arriving, we made our way, half on instinct and half on dumb luck, to the funky Hostel Mostel where we’ll be staying for the next few days. We’re back to staying at Hostels and in Sofia where we have a private room as part of a five bedroom apartment annex right in the center town. The street cars out our window generate a lot of noise and the bathroom sinks are a bit too small, but for $34 a night giving us a comfy, clean, big room, we really can’t complain. Once we settled in, the city was ours to explore. Brooke and I turn our excitement level up a little bit higher each time we step foot in a new country. A whole new place to explore! We tend to start in the bigger cities because we’ve found that they make perfect jumping off places. And when you may not have a lot of overall time in a specific country, these big metropolises are a great place to start.

After getting settled with a much needed shower and afternoon nap, we joined the 6pm Free Sofia Tour walking tour. We had an exceptional guide who spent two hours giving us a basic overview of the city and it’s rich and detailed past. It was an amazing, informative tour where we learned everything from where Sofia earned it’s name to the history of the palace guards to the supposed communist era tunnels that run underneath the city and are still shrouded in secrecy. What a fabulous way to get some perspective and kick off our visit. The icing on the cake was the dinner that followed at a local Bulgarian restaurant where we dined with a friendly fellow American we met while on the tour.  He is working here for a month, and was able to give us some useful insights into the culture and people,

The most important thing to know about getting by in Bulgaria is that the dreaded cyrillic alphabet is used here. The same cryptic set of symbols is found in Russia and used by millions elsewhere. B becomes V, Ps are Greek PIs, etc. Not speaking the language already makes things a little tricky but not being able to read any signs, menus, maps and more makes things that much more difficult. The second most important thing to know is that the weather here has been absolutely gorgeous. Talk about coming at the right time. Perfect weather immediately gives us a favorable impression.  On top of that, this past Saturday was Bulgarian Independence Day (celebrating their independence from the Ottoman Empire so many years ago) creating a Sofia that is alive and bursting with people and activities everywhere. Sofia strikes us as a young city trying, much like Bucharest, to break out of the shadow of decades of iron curtain rule. The Soviet era statues and buildings are gradually being replaced or just allowed to crumble altogether, while a new city is slowly starting to spring up carefully around historic structures. For the record, we’re pretty certain now that every single Eastern Block city had a giant statue of Lenin somewhere along the way. Sofia just removed their own 25′ version a few years ago. 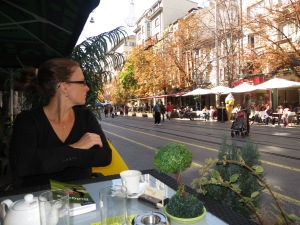 Sofia scores impressively high on the walkability scale. It’s been easy to make short treks from bars to monuments to post offices. And where we can’t walk, a thorough network of trams and buses has been able to give us a cheap, speedy ride. But what has been most remarkable is the amount of history we’ve found here in such a short time! Churches, synagogues and mosques that are hundreds and hundreds of years old house active congregations and international visitors rather than sit idle as museums. Just recently, while expanding the city’s Metro, local workers unearthed ruins that date back to the fourth century. The fourth century! I’m pretty sure when they expand the subway in Los Angeles they just find more rocks. And this isn’t the first time we’ve heard this: in both Copenhagen and Bucharest, expanding metro construction has revealed ancient archeology finds that are re-writing some of the nation’s history. Simply amazing. But that all pales in comparison to our most important discovery about Sofia: There is gelato everywhere. The national pastime here must be to own a gelato stand because we can’t go five feet without tripping into the deliciousness.  I think we’ll have to sample several different vendors so we can provide you with a fair assessment.  That only seems right.

Our one complaint about Sofia? The sidewalks are absurdly uneven and broken apart. i know that sounds like a petty complaint, but see below for a video clip of Brooke walking down the street. It was a lot like this…(skip to :37 if needed)

Our delicious dinner with our new Sofia friend Woody on our first night in town. The shopska salad is an instant favorite

Our view from our train ride 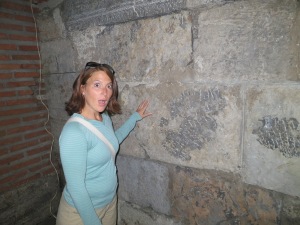 Brooke touching buried walls of an ancient fort discovered only in the 1970’s when the subway was built. So cool to be able to walk around the ruins!

The Bulgarian Guard at the office of the President

4 thoughts on “Welcome to Sofia!”