When we told people we would be heading to Glasgow, almost all of them asked, “Will you got to Edinburgh?”  Time after time people told us there isn’t much to do in Glasgow and we shouldn’t spend too much time here.  After spending the day exploring this city, we are so chock-full of things we want to do that we are considering extending our stay one more day.  Filled with great food and culture, Glasgow appears to be a wonderful city with tons for us to see and do.

We began our day the way anyone should while in Scotland–with a traditional breakfast. Pulled in by the sign that said “Scottish Breakfast £2.99”, we sat down in Wetherspoons.  I went for the breakfast wrap, but Phil is in full Scottish mode and ordered the Traditional Breakfast.  When his plate came, it was a feast of all things protein:  fried egg, fried sausage, bacon, and beans on toast.  Figuring this to be the perfect way to start our day in Scotland, we cleared our plates and then headed into the city.

As you have seen if you’ve read other blog posts, we really enjoy the Hop-on/Hop-off City Sightseeing bus tours.  Doing this upon arrival to a new city really helps to understand the layout and what it has to offer.  In the past, we have always had the pre-recorded tours.  This allows for greater flexibility as the tours can be given in several different languages.  This company also has that option, but the bus we got on had a live tour guide.  It didn’t take us long to realize how much better a live tour is than a pre-recorded one.  Having grown up in Glasgow, this gentleman could speak to the way things were when he was a boy compared to today.  He kept us updated on current events regarding construction projects and city news.  Most importantly, he was much more entertaining than a recording.  His dry sense of humor had us questioning a few times whether he was joking or not.  On the tour, we explored the city’s centre, west end and river front.  We were unaware of Glasgow’s rich ship building history and learned that the town still engages in this trade today.

After the tour, we stopped for a warm bowl of soup to warm us up because let me tell you–it is cold here.  Maybe 45 degrees today, everyone seemed cheered that at least the sun was shining.  Our tour guide joked that we were all baking in the hot sun at the top of the bus and added that maybe the sun would come out again in another 3 years.  In fact, all day we heard joke after joke about the gray, rainy, cold weather which is commonplace here.  We realize we might be very lucky to be graced by sunshine today and we should enjoy it while we can. (The weather for the rest of the week looks like a lot of rain.)  Once sufficiently warmed by some sweet corn chowder, we ventured back into the cold only briefly to head to the City Chambers, the headquarters of Glasgow’s City Council.  This beautiful old building is situated in the center of the city, just off George Square.  When we heard they offered free tours of the interior, we figured it would be a great way to learn a little bit more about the city’s history.  The building was completed in 1888 and is a display of decadence and wealth.  It has two staircases, the white and the black, so named for the material which was used in building them.  In days of old, only the wealthy nobility and royals were allowed to use the white marble staircase.  The other was reserved for servants and working class visitors. On our tour we visited the banquet hall, the council chamber and the art gallery, where each Lord Provost throughout history has a portrait hanging.  All in all, our tour was really interesting and a good start in helping us to understand the Scottish brogue (I swear, sometimes it sounds like a totally foreign language).

After switching our luggage from our previous night’s hotel to our new Air BnB stay, we went looking for our first pint of the day.  We discovered The Grove, an old man bar if ever there was one.  With horse racing on the TV screen and talk of the Scotland v. Belgium football game tomorrow, it was a great place for a drink.  Phil opted for a Guinness while I tried a Belhaven, all for a mere £5.  At this price, I imagine we’ll be back here again tomorrow! From here, we went to a place called Neighborhood Bar to take advantage of their 2-for-1 deal on dinner.  Then, we headed to the famed King Tut’s Wah Wah Hut for some live music.  We haven’t really caught too many live shows on the trip yet, and King Tut’s is known for having all kinds of different bands each night of the week. (Their claim to fame is being the bar where Oasis was discovered.)  The lineup tonight consisted of bands we have never heard of, but that is half the fun of going to a show like this anyway.  The first act, Jonny Jack, was a young rock band.  Well rehearsed, they played together tightly, but their music wasn’t terribly original.  The lead singer’s voice reminded us of Rob Thomas from his Matchbox 20 days.  Next was a solo artist named Luke Sital-Singh, who played slow, sad songs on his guitar that would have been perfect if we were terribly depressed.  His voice was great, but the songs started to all sound the same after a while.  The headlining act, Fossil Collective, seems to have been around a while since they definitely had some regular fans there to catch the show.  Following the footsteps of many other modern bands, they have a multi-vocal, full harmonic sound along with their many guitars.  They sound a bit similar to Grizzly Bear with a voice like My Morning Jacket.

But the gem of the night was Cherry Grove.  We knew we were in for a treat when they began setting up their stage.  Instruments include your basic keyboard and guitar, but then they also had a violin, harp and accordion.  These incredibly talented musicians played a great set.  Sometimes with vocals, sometimes only instruments, they modernized traditional music and instruments in a creative and innovative way.  They seemed to genuinely have fun on stage, and you got the sense that they probably all met at a music conservatory because they have mastered their instruments.  They were releasing their first EP tonight, and it was clear to see that much of the audience came to see them.  The show would have been worth it even if Cherry Grove was the only band we saw.

King Tut’s Wah Wah Hut has a midnight curfew to respect their neighbors, so once the bands were done we walked home, huddled together to keep warm.  We are so pleased with our first day in Glasgow and we can’t wait for all that we have in store for tomorrow.  We will do a nice variety of museums, exploration, and sport.  As long as we don’t freeze first! 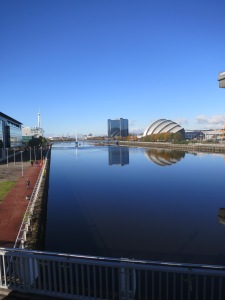 Beautiful view of the Clyde River.

Phil in the City Chambers.

Brooke always wants to be in charge. 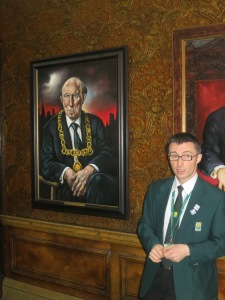 One Lord Provost chose to have his portrait done by an artist with a very unique style. It is very intriguing.

One thought on “Glasgow, Scotland”