The Sun Shines on Edinburgh 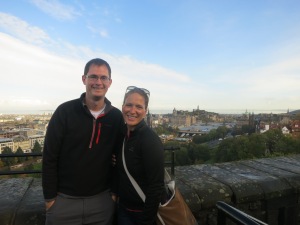 After a rainy arrival in Edinburgh yesterday, we were happy to see the sun shining bright this morning.  Sure, there were clouds looming in the distance–this is Scotland in October, after all.  Now that we are seeing it by the light of day, it is clear how different Edinburgh is from Glasgow.  It immediately feels older, more preserved and more traditional.  It also has beautiful views at every turn.  One minute we find ourselves peering over a bridge down to a beautiful park, the next we are staring up to hills lined with Gothic style buildings.  Wanting to take full advantage of this sunny-ish day, we made a list full of possible things to do and decided to start where any visit to this city should:  Edinburgh Castle.

Edinburgh Castle is impossible to miss.  It sits upon the highest point in the city, rising high for all to see.  Although we were told this is a “can’t miss” attraction, we were a bit turned off by the steep admission price of £14.50 per person.  That price makes it one of the most expensive attraction in town, and we questioned if this was the best use of our time and money.  After a little more research, we decided it was worth it and climbed the steep hill toward the entrance gate.  Visually striking, this castle is a labyrinth of twisting, turning cobblestone streets.  Upon entrance, we learned a short guided tour is included in the price of admission.  Already feeling the ticket was paying for itself, we stuck around to meet Gavin, an awesome and charismatic tour guide who gave us the basics of the castle grounds.  First covering the age of the castle, and the many different iterations it has gone through over the years, Gavin regaled us with stories of Scottish history as though he were performing a well-rehearsed play.  He took jabs at the British in all the appropriate places and spent a good five minutes railing Mel Gibson for his portrayal of William Wallace in Braveheart.  Actually, he landbasted almost every fact about this film including the title character.  Braveheart is actually the name given to Robert the Bruce, not William Wallace.  His passionate stance against the film is more a symptom of his love for Scottish history than his hatred of Mel Gibson (thought it’s a close call).  As we toured the castle grounds with Gavin, he explained that the castle is still used as a military base today.  Besides the few buildings still in use by the military, most of the remainder of the grounds have been turned into museum exhibits.  We visited the National War Museum, the Prisons of War exhibit, and the Honours of Scotland.  In this last exhibit, we viewed the history of the Scottish crown jewels–the sword, the scepter and the crown.  These are the oldest crown jewels in Europe and they sit beside the Stone of Destiny.  This stone has been used for centuries as the seat of the incoming king or queen at the moment of coronation.  It was stolen from Scotland over 700 years ago by the British and not returned until 1996.  Gavin is still a wee bit upset about this!

One of the highlights of the Edinburgh Castle was watching the One O’Clock Gun.  A tradition reaching back hundreds of years, the one o’clock time signal used to be done with a flag being hoisted in the air and then dropping exactly at one in the afternoon.  This helped railroad workers and ship’s captains to keep their times accurate before clocks were what they are today.  However, the weather in Edinburgh is not known for always being crystal clear and it wasn’t always possible for people to see the flag.  They incorporated the firing of a gun so the signal would be clear, even when the weather was bad.  Though no longer needed, the tradition continues every day at 1pm. Perched at the castle wall, a soldier comes out, loads the gun and fires off into the distance.  Surprisingly, there are a number of places around the world who still continue this tradition, including Ft. Henry in the United States.  One of the best parts of watching the gun fire is the gorgeous view from the spot where the gun sits.  We could see across the entire city, to the Firth of Forth and over to the island of Fife.  We were grateful it was a clear day.  Before we left the castle grounds, we made sure to head to St. Margaret’s Chapel, not only the oldest building on the grounds, but also the oldest in Edinburgh.  It was probably built around 1130 and it takes approximately 30 seconds to soak in the entire space.  Still, it was worth stopping in.  All in all, Edinburgh Castle was expensive, but worth the price of admission.  The guided tour was really wonderful, and we both feel like we have learned so much more about Scottish National History in this one visit than we did during our entire time in Glasgow.

It was a lot of this. Highland soldiers and royalty. Over and over again.

Continuing our bit of Scottish History, we visited the National Portrait Gallery.  This free museum is filled with portraits and sculptures of all the famous folks of Scotland, from Bonnie Prince Charlie to Sean Connery.  Unfortunately, the galleries holding portraits of modern members of Scottish culture were closed to prepare for an upcoming exhibit.  So, we walked around viewing portrait after portrait of James the VI, James the VII, James Edward Stuart–there were lots of James’.  We both enjoy portraits, but after a while they all started running together and we were just about done with visiting museums.

With a sprinkle beginning to fall, we decided it was time to head to the grocery store.  It was finally time to take advantage of our wonderful Air BnB home and cook dinner for ourselves.  I can’t express the comfort we both felt in cruising the aisles of the grocery store for ingredients.  Our hostess is away for the duration of our stay, so we have her apartment to ourselves.  I’d be lying if I didn’t admit that it almost felt like being at home tonight.  A fire burning in the fireplace and rain falling outside, we warmed up by cooking a familiar dish, drinking a bottle of wine and watching my favorite Masterpiece Mystery series, Inspector Lewis. Neither of us has been homesick much on our trip, but this evening made us both long for the comforts of home.  We’ve already decided to cook tomorrow night, too, before heading out on a Literary Pub Tour.  We are really looking forward to it.  Cross your fingers that the rain stays at bay again tomorrow! 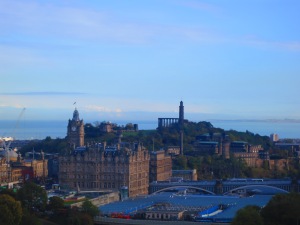 A view of Edinburgh and out to the Firth of Forth.

Gorgeous views from the castle walls.

One thought on “The Sun Shines on Edinburgh”