Apologies for the delayed posting today! We try to get our new posts live every day by first thing in the morning, but sometimes our trip gets in the way! If you prefer to receive the updates via e-mail, feel free to click the link to the right to subscribe!

Good day from Budapest! I can summarize my impressions of Budapest in just two words: Insanely Beautiful. Good Goulash, this is an outrageouly gorgeous city! You can see it from the wide avenues to the stunning buildings along the Danube like the Royal Palace, Parliament and Saint Stephen’s Basilica. I’m in awe of some of our almost fake looking photos; they appear a bit as if we’re at a professional studio and we’ve requested the “Amazing European Background.” Grand buildings as far as the eye can see. And almost everything is in great shape. Maybe Budapest has a good chunk of money at its disposal for upkeep. Maybe its easier to keep a city in top form when it’s a couple of hundred years old instead of a couple thousand. We’re not sure, but we do struggle with the question, how many sensational buildings, statues, monuments, hotels, bridges and more can one city have? Walking around and craning my neck upwards, I am pretty sure I would give my left pinky to live in some of these apartments. 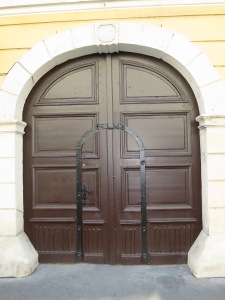 At this point, it’s almost a certainty that five days won’t be enough time to see what we want to see. I know we’ve repeated that rallying cry in many city stops, but we really mean it here. Every time we look around a bit, talk to someone else or read something new  in the tour books, we realize that we could spend another week here. To be fair, it doesn’t hurt that we’re staying at the oh-so-fabulous Le Meridien (thanks again, Tom) – an absurdly nice hotel with arguably the perfect location in Budapest. The quality of our accommodations have ranged wildly on our trip thus far. One night, we find ourselves in an overpriced and extremely sparse hotel in Hiroshima, Japan where one must push a button in the shower every thirty seconds to continue the water flow and another night we’re soaking up  the splendor of Le Meridien where we have a bathtub that could comfortably hold an infant whale. Adding to the high class ambience of the hotel is the robe-clad delegation of Lebanese ambassadors we see at breakfast every morning. For the record, they love the omelet station. 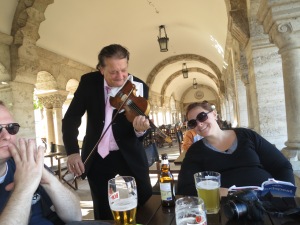 Yesterday, we continued to tour around the Hungarian capital with Gina and Tom, our friends from back home. Along with all the sightseeing, we’ve enjoyed meals and drinks all across the city. Since it’s considered very bad form to clink glasses while toasting, we’ve been enjoying several silent cheers where glasses are lifted and we all say “Shhhhhh!”  It’s been such a blast that we’ve decided that we’re going to get matching sets of tattoos: Brooke & I will get some ink on our arms that says “Buda” while Gina & Tom will have a corresponding permanent set that says “Pest.”  Getting around has also been easy because English is incredibly prevalent, at least in the Belvaros section of town . However, the locals do have a bad habit of answering questions with a muttered jumble of “yes..no…whatever.” A bit irritating when trying to ask about a menu item at dinner or try to figure out when the next bus arrives. Speaking of food, I was surprised to learn that Paprika, of both the sweet and hot variety, is the ubiquitous spice that is the national pride of Hungary. Paprika is a part of endless dishes and often present on the table as a condiment. Also, for the first time in our travels, our tipping dilemma has been solved when dining out; the bill on every single meal so far has included a mandatory service fee or tip of 10% to 15%. That’s a first. 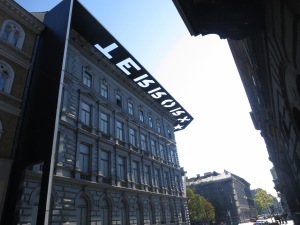 The House of Terror- When the light shines through the stenciled awning, the word Terror appears on two sides!

Yesterday morning, we took a trip to the House of Terror – a museum built in the building that housed the Secret Police during most of the Communist era. Brooke and I have found that we’re really interested in taking in first hand accounts of European history between, say, 1938 and the late 1960’s. We’ve seen some interesting exhibits and museums dealing with modern history (I’m pretty sure I’ve seen so many pictures of Stalin, I can draw him in my sleep now), but this museum has topped them all. The museum details everything from the Budapest’s double occupation of the 1940’s (Germany and then the Soviet Union) to the frightening tactics of the secret police during the Soviet Era. Well designed rooms really painted a picture of the fear, paranoia and nature of living in the communist state through the 1950’s. Fascinating and horrible. Especially in the basement rooms that housed the re-creation of cells designed to break spirits and bodies. The museum might have benefited a bit from a bit more English, but there were English handouts in each room which expounded on things like propaganda and trials of “traitors”.  All in all, it is very powerful and helps to expose all that was done in secret. “Terror” is about the right word.

During the afternoon, we took a trip over to the Buda side of the city located in the hills of the former Buda Castle sight. Buda Castle is long gone, but we visited the underground labyrinth where the reviews were mixed. I thought the winding, endless ancient caverns that have been used for generations were interesting and fun to explore, while Gina and Tom thought the caves were boring, gave very little info about the history of the caves, and empty save some poorly made wax figures. But Budapest visitors beware! The more we read, we’re learning that the award-winning, top attraction, amazing caves closed in July 2011 and we might have been a bit duped into visiting a fly-by-night company that set up shop in the old caverns. It’s tricky – after all, who expects two sets of caverns? Outside, however, the views from the Fisherman’s Bastion were once again, sensational (lesson of the day: learning what a bastion is). We opted to spend our money on some afternoon drinks rather than pay the admission to walk the top of the overlook. We were serenaded with a three piece classical band (who later hit us up to buy their CD) and nice fall weather. We knew that we were smack dab in a touristy center when we saw three sets of violinists scattered throughout the hill top. Lucky for us, our tickets on the hop-on hop-off tour bus gave us a ride back to the hotel along with some quality new information about the city. A free ride and a city guide. Good stuff.

We have so much more to see and explore! And a big bowl of goulash waiting for me at dinner tonight. What’s next on the agenda?  Hungarian baths, memento park and more!