There are no two ways about it: Brooke and I have really enjoyed our time in Hong Kong. We really dig it here. We’ve been in town just long enough to get a taste for this unique city. Three days has been enough time to allow us to get a sampling that left us with a quality impression of Hong Kong. This is a city that manages to be both part of China, but not much at all like the rest of China.

As with every destination so far, we had some miscues upon first arriving. After rolling into town, we were quickly misled by signs indicating a “subway.” Turns out that a Subway here refers to subterranean passageways underground cross walk and complicated network of pedestrian tunnels scattered throughout the city. These help with the flow of streets and are far more often seen than traditional cross walks. The subways also have an added bonus of being a fantastic way to dodge the summer heat. Of course, we had misinterpreted the “subway” signs for an subterrain train (which is in fact commonly called the MTR). 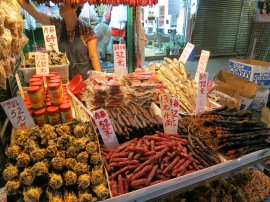 Speaking of the heat, we have been knee deep in it. The sights of Hong Kong during the day have been plagued by some tenacious haze, but I suppose that’s what you get for visiting Southeast Asia in the middle of August. As unlikely as it sounds, it somehow keeps getting hotter and hotter as the day progresses into night. We’re pretty sure that by 8:00 PM it was hotter than it was at 2:00 PM! Baffling. As we head even further south into Vietnam and Singapore, we’re thankful that (so far) we’ve had no trouble finding places to stay that have functional, soothing Air Conditioning. 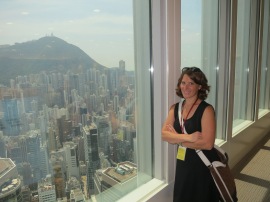 Brooke and the View from the free 55th Floor gallery of the IFC Tower!

Over the course of several bus tours and self guided tours, we’ve taken in a pretty good chunk of the city. One of the great things about this trip has been being able to make connections. We were surprised to see that the “Occupy Wall Street” movement is apparently alive and well beneath the HSBC Bank building in central Hong Kong. There is a public space beneath the bank’s giant tower, reputed to be Hong Kong’s best architectural example of feng shui, that apparently has been bereft of campers and protestors since October. A movement is underway to kick them out, but it is kinda cool to see what was happening all over America also in play in the middle of Hong Kong.

Speaking of banking, we’ve also found that Hong Kong hasn’t been the most inexpensive city, but it hasn’t been as costly as we expected a giant metropolis to be either. We’ve stumbled across some meals that are full of flavor, quick, cheap and no frills just the way we like it. But the (large) beers continually run us about seven dollars a pop. The only exception is during evening Happy Hours and in the outdoor markets where there are an abundance of deals to be found. In this weather, it is hard to resist a nice, cold beer in the middle of sight seeing during a hot day. We’ll keep looking for the perfect dive bar! 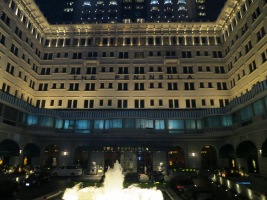 Cost is all relative, I suppose, and flashy businessmen can be seen everywhere.The central neighborhood on Hong Kong Island is a spectacular mesh of glass and steel buildings banking, commerce, company headquarters and high quality hotels. It’s remarkable. There appears to be no end to the number of five star hotels. NEXT time, we will book a room at The Peninsula or the Ritz Carlton…or the Intercontinental! But that’s just one section of town. The culture here is a brilliant blend of 150 years of British colonial rule mixed with with an old Chinese City. The result is a mixed ethnicity, langauge and amusing juxtaposition like a Baptist church next to a market with fresh duck hanging in the window. One of our favorite common sites is buildings under construction with workers climbing on scaffolding…made of bamboo!

Bamboo Scaffolding could be found on buildings everywhere!

And there are some shops we’ve found that are ubiquitous in any city. No matter where we’ve gone so far, we can count on seeing plenty of 7-11s (which have come in quite handy), Starbucks and McDonalds. Our one regret? We might have bought our souvenir set of Chopsticks too soon. Every other shop is selling an interesting set of chopsticks. It’s funny because when you are in the states, you never see stores falling over themselves to sell forks. I can’t wait to see what new experiences Vietnam brings. Onward!

One of our favorite buildings- The twin Lippo Centre which are said to look like Koala Bears climbing the building! 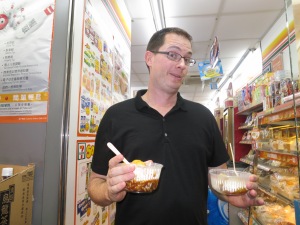