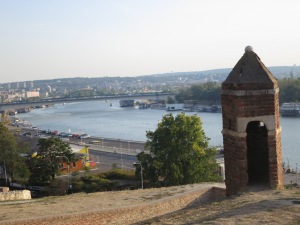 Hello again from Belgrade! The Serbian capital continues to be a surprising gem of our trip. Particularly considering that we didn’t expect to even be in Belgrade as recently as two weeks ago. We keep harping on it, but the weather in Eastern Europe has been as close to perfect as you could ever want. In New Zealand and again in the Baltic states, we were a bit chilly and bundled up. Visiting Asia in August left us predictably sweaty and hot. But in Romania, Bulgaria and Serbia? Perfection. 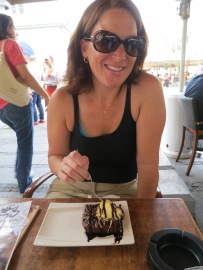 One of favorite hobbies in Belgrade has been spending time in the inexpensive outdoor cafes between visits to museums and self-guided walking tours. There are endless amounts of cute cafes with abundant outdoor seating where curt, hurried waiters bring you an ashtray long before they bring you a napkin. And you know that long, slow meals are the order of things when the hostess warns you before you sit down that “the restaurant is closing in about two hours” and questions whether or not that will be enough time.  Thanks, but we’re not expecting another dozen people to join us. We should be able to wrap up dinner in under 120 minutes. And no matter where we go, we are always only handed a single menu for both of us. Perhaps the union of menu printers is on a long-term strike. We’ve enjoyed coffee drinks, lemonades and ice cold Staropramens (not all at the same time) all over the city. Yesterday, Brooke finally was able to enjoy the hot fudge brownie she’s been seeking since Estonia. Although we’re a bit befuddled that clerks, waiters and cashiers repeatedly do not have any change on purchases. And this is when we’re paying with the equivalent of a $10 bill. We get exasperated looks and shrugs when they can’t cough up some small Dinar. Quite strange.

On thing we’ve really enjoyed is the fact that the city has an elaborate network of sensational parks including Kalemegdan and Aja Ciganlika which have something for everyone. Kalemegdan has provied us overlooks of the scenic confluence of Danube and Sava Rivers and more uses of the world confluences than I’ve encountered in my life. One park had Cable Water Skiing. That was a first for us. Cable Water Skiing! Ah, I see something new, novel and interesting every single day on this adventure. 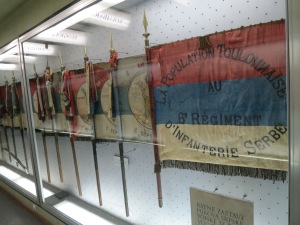 We started our day with a trip to the Belgrade Military Museum inside Kalemegdan park. The museum has a stellar and massive collection of swords, knives, guns and uniforms spanning hundreds of years, but not much history…nor many exhibits in English. After getting burned a couple of times, we’ve learned a good rule of thumb is to always ask at the ticket booth how much of the museum is in English before forking over your cash. However, the museum improved with several rooms dedicated to WWI and WWII with good chunks in English. One highlight and notably eerie exhibit was the blood stained outfit that the Serbian King Alexander was wearing in 1934 when he was assassinated in France. Yowza. We also learned that Serbia is the first country we’ve visited in Eastern Europe who did not align themselves with Germany during WWII and, while quickly succumbing to occupation, can boast an active war time underground resistance. The unfortunate result was a brutal bombing by the Germans in 1941 and then the Allies a few years later. The massive museum provided some interesting highlight, but I would argue that it was a bit too large.

The highlight of our day was a four hour bike ride through a company called “I Bike Belgrade.” A two-wheel tour that took us over a flat, scenic easy course with a pair of exceptional guides. It was nice to be on bikes and the ride was almost exclusively on bike lanes,  away from traffic.  Judging by the looks our group received, I think biking is a somewhat rare affair in Belgrade. The ride took us along the river, over to New Belgrade and back through the parks and waterfront. New Belgrade, built during the 1960’s, reminded us that no communist construction of the 20th century is ever going to win any awards for beauty. This was our kind of tour! An interesting way to see parts of the city that we never would have stumbled across otherwise. Combine that with knowledgable, easy going guides who give pertinent, interesting information at every turn. We learned that bombings from the 1999 Nato campaign were announced and targeted in advance. We learned that several bombed out buildings from ten years ago were left that way as a tourist attraction. We learned that communist leader Tito wanted to build a whole new Belgrade, so he filled in swamp land in the 1960’s. Brooke and I are innately curious about our new surroundings (to learn as much as we can has been one of the primary points of this whole trip), so it is wonderful when we find local people who love to talk about their own home city and answer all of our questions. Brooke loved chatting up our guide and getting the history of Belgrade and his opinions on regional politics. 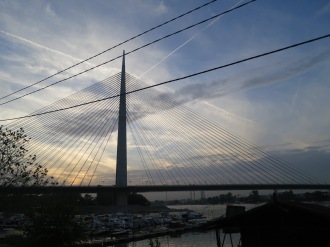 The same company who organized our bike tour also has a “Nightlife Academy” which comes highly recommended.  Unfortunately, we were exhausted and thought a 4 hour pub crawl just might kill us.  Instead, we took a leisurely walk home, stopping for drinks and then separately for dinner.  Without realizing it, I essentially ordered a plate full of meat, and it seems almost impossible to order a meal here which isn’t 90% meat, 9% onion and 1% other.  Don’t get me wrong – the five different samples of pork, steak, chicken, lamb and sausage was delicious. I think tomorrow we will prepare a home-cooked vegetarian meal at the apartment where we are staying.  That will be a refreshing change! 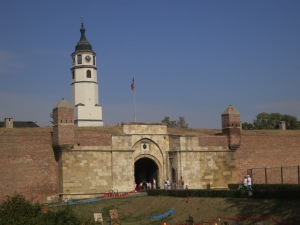 Home of the Military Museum 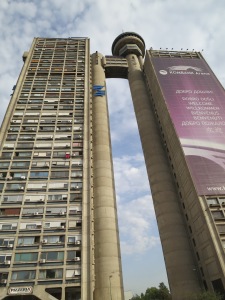 From our bike tour: this office building/apartment in New Belgrade was a coveted building in the 1980’s, now it’s a bit of an unoccupied eye sore. 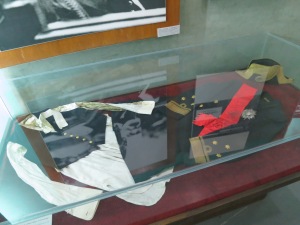 As mentioned above, the blood stained clothes of a slain King from the Military Museum 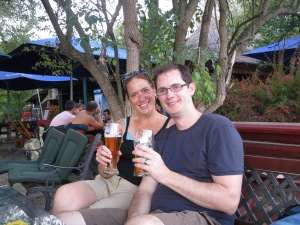 Our reward for a long bike ride- the complimentary beer that comes with our tour! Bonus: this is the 200th photo of us with beer on our RTW Trip!