Napier – On The East Coast of New Zealand

Salutations from another locale in New Zealand- Napier. Today, we made thee short hop out of Rotorua and smack dab on to the west coast of the North Island. We packed up our Spaceship, stopped at the local post office to mail some postcards home to friends & family and began our trek fairly early. Our roads today were marked as the Thermal Explorer Highway which logically would qualify us as documented Thermal Explorers. Hmmm…I better get that on my LinkedIn profile ASAP.

As with other drives we’ve conquered, today was a bit of Adventure Driving. Two lane divided highways through sharp curves and up and down mountains makes for some serious head’s-up motoring. But the stunning views through dramatic changes in topography over the course of just a couple hundred kilometers make up for it. Scenic? Not even close. The sites of mountains, sloping hills and more are the very definition of majestic. We now have had a chance to drive through both the east coast and west coast of the North Island of New Zealand. Both are relatively different with the east coast delivering more mountain ranges. However, no matter where you drive, you’re sure to see lots of grazing sheep happily gallivanting and lots of roundabout traffic circles. Yup. Sheep and roundabouts. Just make it the New Zealand motto.

Before long, we were cruising into Napier and stumbling across the western edge of New Zealand. Nothing but ocean in front of us. Napier sits right on the coast and is chic, sunny and warm. The town has a very different vibe than Rotorua and is laced with endless charming cafes downtown. As with each town before it, Napier is already different from each town we have already visited. We quickly found a hostel (with the help of Lonely Planet) that was centrally located and was just what we were looking for. The Criterion Hostel offers a solid deal, free breakfast and oozes a bit of charm in an art deco style building. 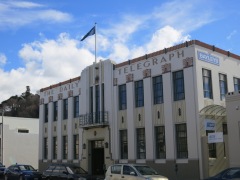 A bit about Napier: The town is best known for a horrific 1931 earthquake that was New Zealand’s worst natural disaster and the corresponding rebuilding that established the town as the Art Deco capital of the world. There are markers and tributes to the earthquake everywhere and the art deco style is universal. What’s truly fascinating is that the earthquake ADDED almost 40 sq km of NEW land to the city that had previously been swamp land. When the city rebuilt, a very deliberate decision was made to create almost everything in the style of the day: Art Deco. In fact, it’s hard to spend an afternoon in Napier without being constantly reminded of the towns two claims to fame. They are touted heavily everywhere. Even more recent construction keeps with the Art Deco theme and while I don’t know I.M. Pei from I.B.M. the buildings really do standout and have a great look to them. The hilly residential section near downtown reminded me a lot of San Francisco. We’re glad to be here, even if its just for a day. It’s been fun to kick around the town for a while.

After arriving, we discovered that the bluff overlooking the shore was the perfect place to munch on a sack lunch while enjoying the view and watch a large container ship ease into the Napier Port. Later, we stumbled across the Art Deco Trust Centre (where we did our best to sit through an only slighlty mind-numbing 24 minute video) and embarked on a self-guided walking tour of the Art Deco buildings throughout town. Good times overall, but Brooke and I struggled a bit with the self-guided tour. In part because the guide was less than stellar with the information and in part because architectural beauty isn’t completely our cup of tea. We became more adept at self guiding when we started wandering into buildings and asking questions. In one top hotel, several old built-in-wall vaults now double as high end liquor storage. It was a quality crash course in the overall building style. Brooke and I can now speak knowledgeably to zigzags, sunbursts, ziggurats, facades and more.

We ended our day with drinks and dinner at the Brazen Head down the street from our hostel after abandoning plans to visit an upscale winery. While watching music videos in the bar, it looked for a minute that Ron Weasley had embarked on a pop career. Turns out, wait, he’s just acting in a somewhat hilarious music video. Well played, Ron Weasley! We even were able to enjoy a new local beer called Rooster Lager. Tomorrow: Windy Welly (that’s Wellington) and checking into our first AirBnB stay!