Kia Ora from Auckland, New Zealand! After a good bit of traveling, we’ve made it to the “City of Sails” and just wrapped up our first day of exploring this new country. Knee deep in guidebooks and pamphlets on New Zealand’s largest city, we hit the ground running as soon as we landed. We checked into our hotel room at the Kiwi International. It is a sparse and simple dormitory-style room with a bathroom down the hall, but it will work just great for our two night stay. After all, we don’t plan on spending much time in our hotel room. Our first full day abroad has been a great day. A full day. A busy day. Exploring Auckland, we managed to take in, absorb and learn a ton. After a long day on our feet, it feels like we’re starting to get the hang of things in New Zealand…at least we think we are. 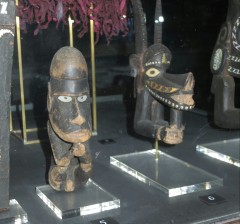 We started the day with breakfast and coffee from a local coffee shop where we quickly learned that Auckland loves their coffee shops. You can’t go more than two blocks without tripping over a Gloria Jean’s, Esquire, or, yes, even a Starbucks. A morning trek took us to the Auckland Museum -an impressive collection that has a little bit of everything spread out over three floors. It houses exhibits on Maori culture and history, natural wonders and a history of New Zealand in combat along side a stunning war memorial. After visiting, I finally know exactly what the Anglo-Boer War as all about (always curious about that one). Another exhibit which had an all too real simulation made me absolutely friggin’ terrified of volcanoes. Additionally, we learned that a perplexingly large number of flightless birds apparently enjoy living in New Zealand. Finaly, I’ve decided to start addressing my wife as “Mollyhawk.” Sure, it’s a native bird, but it is also a bad-ass/affectionate nickname. All in all, the Auckland Museum is a truly wonderful place that shouldn’t be missed – especially considering the reasonable $10 NZD suggested donation.

From the museum, we negotiated the bus system and headed to the posh, fashionable and charmingly old neighborhood of Ponsonby. This area is filled with so many cute shops and upscale bistros that it might make you ask, “How many cute shops and upscale bistros does one city of 1.4 million people need?” We also stumbled across an incredible used bookstore while in Ponsonby. After talking with the Zimbambwe-born clerk (and possible proprietor), we snagged a used New Zealand Lonely Planet travel guide for seven bucks and bought detailed map from a nearby magazine store. We now have the tools that we need to plan the next 11 days here.

Throughout the day, we were given endless advice by helpful locals. Kiwi here really love to talk about New Zealand and offer enthusiastic suggestions on what to do and where to go. Based on feedback we’ve received from locals, we’re a little nervous that the almost-two weeks we have in New Zealand won’t be enough time to see everything that we want to see. But, to be fair, most people here consider a three and a half week trip anywhere a short time off. Given their relative isolation and spirit for adventure, New Zealanders are quite the traveling folk. There are almost as many travel agency store fronts as there are coffee shops!

It’s also been very cool to take in the dozens of small differences in a country that seems so familiar but also a bit foreign. For example, the price on any purchase is rounded up to the nearest ten cents. Every single cost will only end in a zero ($.10, .20, .30 etc) and the smallest denomination coin is a dime but it is nearly identical in size and color to the US penny. We’ll take note of more small differences we notice and keep you posted. You can see a couple in the pictures below. 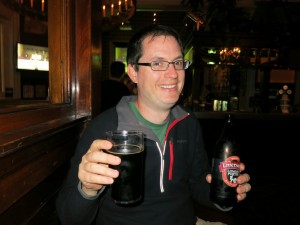 After our long day, the night ended with a couple of beers from a bar called “Brews on Quay” where we watched some Olympic Rowing, chatted with the Scottish bartenders and enjoyed the tunes from a two-piece cover band. Tomorrow we’re departing Auckland and heading south to Raglan, Hamilton and the Glow Worm caves near Waitomo. We’ll be traveling there by Spaceship. Seriously. More on THAT tomorrow.

Instead of “Yield” the signs command that you “Give Way!”

Not seen in America: A radio station that ends in an even decimal- .6! 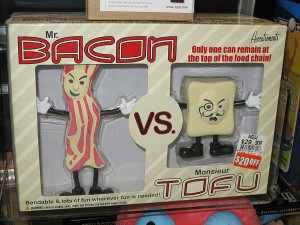 We just had to share this: It’s Bacon vs Tofu!