Rabbie’s Tour of the Highlands–Day 1 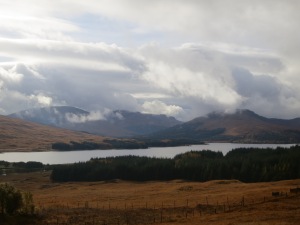 Today began our adventure to the Highlands and the Isle of Skye with Rabbie’s Trail Burners. After loading up the van, 14 excited passengers led by our driver/guide Doug, left Edinburgh to explore the vast Highlands. Much of our day was dedicated to actually getting to the Isle of Skye, though we did stop several times along the way to appreciate the scenery and take in some local sights. 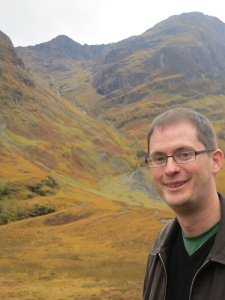 When we arrived in Scotland, we knew that we wanted to see the Highlands. After all, we wouldn’t really be seeing the country without making this part of the journey. We briefly considered renting a car and driving ourselves. We did this in New Zealand, and while that was fun, it was also tiring and involved some harrowing driving in the rain (on the wrong side of the road). Worried we might be in for something similar here in Scotland, we decided to go with a guided tour instead, accepting that it would be a bit pricier. Within 30 minutes of beginning the tour, I knew we had made the right decision. Our guide, Doug, immediately started telling us stories about the history of Edinburgh as we pulled out of the city. One story I loved takes place at the Edinburgh Zoo. They have had a penguin colony since the early days of the zoo and once, over 50 years ago, the penguins accidentally got out of their enclosure. However, they didn’t run wild or get out of the park. Instead, they walked in a single file line around the park and then right back into their pen. The interesting part? They’ve been doing it every day since then. That’s right. Each day at 2:15 pm the zoo keepers open the door and the penguins commence their parade. Apparently it is quite the spectacle and an attraction for many tourists. It is these kinds of stories which Doug has been sharing with us all day. We are so filled with information and our tour has only just begun! 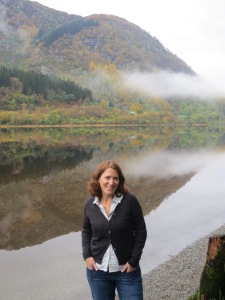 Aside from the fact that they are said to have awesome guides, one of the reasons we chose Rabbie’s tours is because it caps the number of participants at sixteen. This allows for more interaction among the people and also more flexibility. This flexibility proved useful when we drove past our first loch. The water looked like glass with the trees and mountains reflecting off it. Doug thought it was too beautiful to pass up, so we pulled over for a few minutes to take in the scenery and snap a few pictures. If we had been on a bus with 45 tourists, we probably wouldn’t have stopped and it certainly would have taken more than 5 minutes. We appreciate that Doug takes advantage of the small size of the group to take engage in these kinds of experiences. 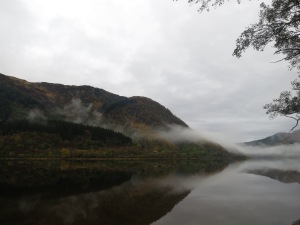 As we made our way into the Highlands, Doug regaled us with stories of clans and chieftains, marriages and murders. One of the most gruesome occurred in Glen Coe when the Campbells took advantage of the kindness of the MacDonalds and killed them in cold blood while they were sleeping. Thirty-seven MacDonalds died including their chief. There are still pubs in Glen Coe today who will deny service to those with the name Campbell. Historical tales like these captivated us throughout the long drive. Doug has amassed an amazing wealth of knowledge and he is such a wonderful story teller, as so many Scots are. Not only did he entertaining us as we drove, he also played DJ by sharing music from Scottish artists both old and new. I think the more scenic the landscape, the more traditional the music became. This was fine by me. What could be more perfect than driving through the Highlands, gazing at the mountains, glens and lochs, and hearing the Scottish pipes playing on the radio? Absolutely wonderful. 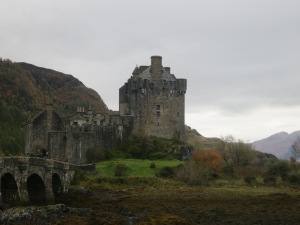 We made several stops for photos, but the main attraction we visited before arriving in Portree, on the Isle of Skye, was Eilean Donan Castle. This much loved, photographed and filmed castle is set on the side of a Loch Duich at the base of a mountain. It couldn’t be more picturesque and it could have been really awesome. If it was the original castle. Which it isn’t. The original one was destroyed during the Jacobite uprising in 1745. The one which stands in its place is a recreation from the 1920’s. Still very cool. All based on the original plans. But honestly, seeing modern wedding photos and decorations was a bit of a letdown. In fact, part of the castle is still kept by the McRae family for private apartments where they take vacations. It’s no wonder this picturesque castle has been used in films such as Highlander, James Bond and Brave (in animated form). It is in such great shape because it isn’t actually very old!

After the castle, we drove toward Portree. With a population of 5,000, it is the largest town on the Isle of Skye whose total population is approximately 10,000. Still, this is by no means a large town. We managed to walk around and check it out in about 10 minutes. Of course our walk was made quicker because it was after 6pm therefore everything was closed. After all, it is Saturday night. God forbid something should be open until 8pm. We managed to scrounge up some fish and chips for dinner before heading back to our hostel for the night. We are exhausted. Even though we weren’t traipsing around all day, like we will be tomorrow, the drive was a bit mentally exhausting. Doug has shared so much history and many great stories. I’m grateful Phil and I have each other to help us remember it all…well, at least most of it! 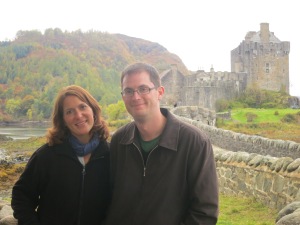 In front of Eilean Donan Castle. See, we bought jackets! 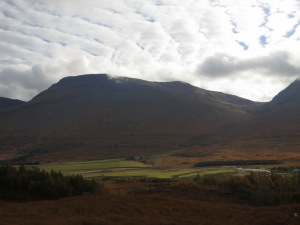 The views are just stunning! We won’t be hurting for beautiful pictures over the next couple of days. 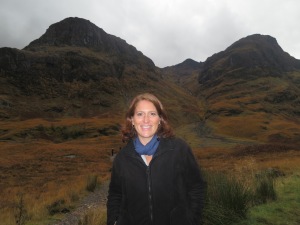 In front of the foothills near Glen Coe. 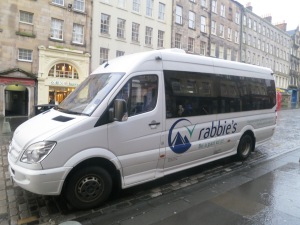 Our transportation for the next few days. Pretty stylish, right?

2 thoughts on “Rabbie’s Tour of the Highlands–Day 1”