I would be lying if I told you that all days on this trip were created equal. Some days are just simply better -more enjoyable, more interesting – than others. Today was one of those fantastic gems of a day. Brooke and I are on our second day of a three day tour of the Scottish Highlands through the impeccable Rabbie’s tour company. It was an extensive, full day of tramping around the Isle of Skye in our comfortable tour van. Traveling among the company of a small, but enthusiastic group of fellow explorers, we managed to hit all of the highlights of Skye by crisscrossing the island over the course of the day. We accomplished it all while enjoying a soundtrack provided by an animated guide (and top notch storyteller) who delivered memorable, captivating stories on topics ranging from Scottish folklore, sports, history, clan chieftains and more. The accompaniment for the ride was a solid playlist of tunes by Scottish artists and beyond which played between the commentary. And that’s all of the good stuff before we get into the amazing landscapes and dazzling vistas. Not too mention dinner, drinks and live music at the pub. And then evening pub hopping in the sleepy town of Portree. It was the perfect way to spend any Sunday.

The sights here are largely made up of the natural beauty of glens, lochs, hills and rolling valleys. All combined, they make up some of the most beautiful views we’ve seen on the trip. And we don’t toss out such accolades lightly; beneath clouds or under bright sunshine, it is friggin’ gorgeous here. The Isle of Skye is remote and sparsely populated but has a more diverse topography than you might find over three states back home. Thankfully, our venerable guide Doug made plenty of stops so we could enjoy every photo opportunity that ranged from an old brock to a waterfall stepped in superstition. 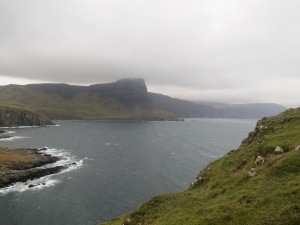 Our first stop today was at a 2,000 year old brock (an old stone tower) just off the side of the road. I’m sure everyone has their own benchmark, but I know I’m in middle of a good day when I’m conquering ancient castle remains all before 10:00 AM. After dodging both loose rocks and sheep droppings, we climbed our way to the top to soak in the first of several stunning views of the day. A short drive down the road took us to the seaside cliffs of the Neist Point Lighthouse on the Western Coast of the island. We all shrugged off the winds and clouds to meander down the walkway and up a steep hill. Again, amazing view. 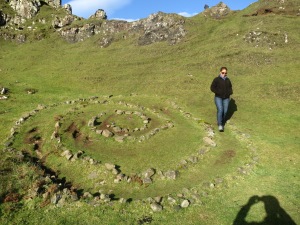 After another quick stop, we enjoyed a quick rest and tasty lunch in Uig. Before long, the sun was out and we were off to my favorite stop of the day: The Faeries Glen. Doug gave us three strict rules when visiting the fabled land of the mythical Scottish faeries: We were warned not to whistle, not to leave any gifts made of iron and not to remove anything from the glen or else we might risk a curse. I was just afraid that Brooke might fall somewhere through time after entering a stone circle. Legends and fairies aside, the place was relatively magical in its setting alone. Green as far as they eye can see and steep, sloping grassy hills punctuated with a towering stone formation. Amazing landscapes are tricky because short of an IMAX camera, words and a few photos really fall short. Serene, beautiful and solitary (aside from the loud group of student tourists), I could have spent another hour there.

The day only got better from there. Our van made it’s next stop at an overlook with an astounding view of the east coast of Skye. Looking down into the valley and beyond, we where able to catch a glimpse of the mainland. The steep cliffs als would have doubled for a terrific golf driving range or hang gliding starting point. From there, it was on to see Kilt Rock, The Old Man Of Storr (complete with its own amazing story) and then Bride’s Veil Falls. It was there that Doug convinced a handful of us that an old legend states that dipping your head into the falls is certain to gaurantee…hmm…satisfying romantic encounters for seven years for every second you can stand the cold water. Not wanting to take any changes, Brooke and I both drenched our heads in the water. We ended our tour day with live music and drinks in a neighboring pub.A great day from start to finish. We really can’t say enough great stuff about Doug and Rabbies. It’s safe to say that I’ve absorbed more quality, wonderful information about Scotland in the last few days than I learned in some college courses. Next time we meet up, ask me to tell you the tale of the shirtless clan battle or the Archie Gemmel’s legendary 3rd goal against Holland during the 1978 World Cup. I can know speak in depth to the Scottish origin of the phrases “To tie the knot” and “armed to the teeth.” Under pressure, I could even draw a realistic looking dirk and tell you why it’s best not to hit on the girl at the bar whom your Scottish friend are calling a Minger. I’m loving this exposure to every single ounce of trivia and new vocabulary. Odds are strong that I’m going to bursting with Scotitsh pride by the time we blow town on Tuesday evening. Just like New Zealand, we’re back to seeing sheep every time we turn our head. We’ve been told that the sheep outnumber the human residents eight to in Skye. Contented, slow moving sheep certainly have the run of the place and, thanks to Scottish law, the right of way in the roads. There is no shortage of gentle honking to prod them to move on but since all of the other wildlife (bears, wolfs and more) are long gone from this area, the sheep don’t have a lot to sweat. Thier only threat is blank stares from the occasional neighboring cow. To top it off, this visit has had a bit of special significance because I’ve wanted to visit the Scottish Highlands for as long as I can remember. After all of the photos I’ve seen and all the stories I’ve heard from those who had visited, it’s been a wish of min to see this part of the world in person. Today, I’m able to write about it from a table in a hostel in the middle of Portree. Pretty dang cool. It doesn’t hurt that we’ve met some awesome people during our trip to the Highlands. I look forward to tomorrow: another day in the tour van and a chance to see Loch Ness up close and personal. As we wind down our time in Sottland, I think it’s time to start downing some prime Scotch Whisky and sample the Hagis, but we’ll cross that particular bridge tomorrow. -Phil