After 10 cold, cloudy and often rainy days in Scotland, we were delighted to wake up to the sun beaming brightly through the window in warm Buenos Aires, Argentina.  Still adjusting to the 5 hour time difference, we were up bright and early, ready to see a new city!

One of the reasons we were excited about Argentina is because Phil and I both know a very small amount of Spanish.  Normally, one of the first things we do upon arrival in a new country is ask how to say basic phrases, like “hello”, “please”, and “thank-you”.  However, thanks to a few classes at good ‘ole Miami University (and of course having lived in New York City for six years) we are both able to crudely communicate basic ideas and we can even understand quite a few phases in Español.  I was so proud when I was able to buy subway tickets and not use any English at all.  The ticket agent even asked me a question and I was able to respond.  Wow! What a change from struggling through Eastern Europe.  However, one of the things I find interesting is that there is far less English spoken or on signage here than we have seen in almost every other country.  Luckily, we are able to manage our way through Spanish well-enough to figure out where we are going, but if we didn’t have any knowledge of the language, Buenos Aires would be quite a struggle. 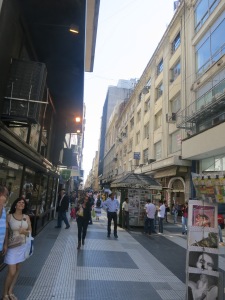 We originally intended to start our day with a hop-on/hop-off bus tour in order to get an overview of the city.  After searching for the bus for a bit, we finally found a line 25 people deep waiting to board.  When the woman who worked for the bus company, clad in bright yellow, informed us the next one would be in about 40 minutes and we’d just have to wait in line until then, we decided this wasn’t going to be the best option.  We didn’t want to waste so much time just waiting around and clearly with lines like this, they don’t have enough buses in operation.  We decided instead to explore some tours suggested by our hotel.  We found the Tangol office at the end of Florida Street and chatted with Enrique.  We lamely tried our Spanish, but we all found English was much easier to communicate with.  Tangol offers all kinds of tours and excursions, from a 6-hour walking tour, to an all day Gaucho expedition.  We inquired about various city tours and their Argentinian Fútbol trip.  We had tons of information swimming in our heads, so for starters we decided to go with a 3-hour city tour on a small bus.  We figured this would be just as good, if not better than the hop-on/hop-off tour because this time we would have a live guide who could answer all of our questions. 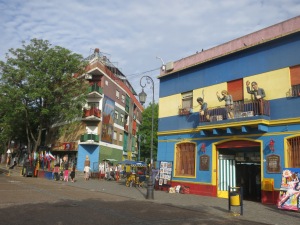 After killing some time walking up and down Florida Street, the pedestrian only shopping street, we boarded the bus.  We discovered that we were the only 2 of 16 passengers who spoke English; the rest spoke Spanish and Portuguese.  Once again reminding us how inferior we feel in the language department, our guide Fakundo, gave the tour in all 3 languages.  However, we often felt his translations into English were a bit of an after thought.  We could pick up a few words in Spanish here and there–enough to know that he wasn’t giving us all of the information in the English translation.  Still, we managed to glean some new information and see some new neighborhoods.  We drove down the avenue Nuevo de Julio, the widest avenue in the world at 140 meters across. (Correction: we’ve since found out that Argentians just like to SAY it is the widest avenue in the world. Turns out that there is a much larger one in Brazil. Don’t tell the Argentians.)  In the center of this avenue we saw the Public Works building with an iron likeness of Eva Peron on either side.  One side looks in anger and seems to be speaking with vehemence toward the wealthy area of Buenos Aires.  The other side is a friendly iron portrait, smiling down on the lower class sections of the city.  Images of Eva Peron can be seen everywhere, and the people still speak of her as a true Argentinian hero.

As we continued our drive, we saw the elegant and sophisticated neighborhoods of Palermo and Recoleta. We then drove toward an older futbol stadium which is home to the Boca Juniors.  Driving through this area immediately reminded us of Wrigleyville in Chicago. Every shop and storefront had jerseys, team colors, flags and mascots hanging from the windows.  This area is clearly centered on their love of this team.  It is situated right alongside the colorful neighborhood, La Boca.  This used to be one of the poorest neighborhood in Buenos Aires.  The materials for the tenements were leftovers from other buildings and the paint used was whatever leftovers would be handed over to the people.  Because of this, the whole neighborhood is a mish-mash of colors and textures.  It has become a center for bohemian and art culture; streets are lined with paintings, cafes and tango dancers.  Although perfectly safe, our guide warned us that you wouldn’t want to stray too far from this neighborhood at night.  There is still quite a bit of poverty in Buenos Aires and in fact they have 3 shanty towns inside the city.  Apparently outside the city there are many more.  The largest one in Buenos Aires lies very close to the wealthy area and holds 60,000 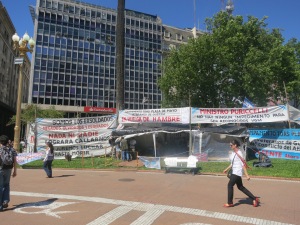 One set of protesters wanting acknowledgement and benefits for their part in the Falklands War.

squatters.  Our guide explained that they have been there for decades and it is almost more like a neighborhood than a shanty-town.

This overview of Buenos Aires was certainly interesting.  Phil thinks this city has one of the biggest dichotomies between rich and poor that we’ve seen.  To be honest, I’m not really seeing the wealth.  I see poverty everywhere, buildings covered in spray paint and protesters in at least 2 spots in the city.  There seems to be struggle and unhappiness.  At the same time, there is also great pride in their heritage–signs for tango shows, classes and clubs are everywhere.  We have only just arrived, but I am interested to dive a little deeper and see how my impressions of Buenos Aires evolve throughout our visit here.