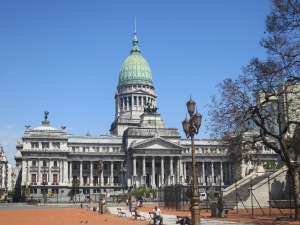 Greetings again from Buenos Aires! It took a day of resting, but we’ve both recovered from the lingering effects of a long couple days of travel. It’s easy to pick up a nasty case of jet lag and a general rundown feeling after traveling on three buses and two 8+ hour intercontinental flights. Now, we’re ready to hit the streets running! We started yesterday with an excellent, free walking tour of the downtown area of Buenos Aires. Our guide Virigina was animated, informative, opinionated (in a good way!) and lively. It’s not the first time we’ve stumbled across a free walking or biking tour that has been simply exceptional. Given Virginia’s enthusiasm, amount of information delivered and the fact that the tour was was entirely in English, the Free Buenos Aires Walking Tour was exponentially superior to the Tangol van tour we took the day before. Although central Buenos Aires is considerably sleepier on a Saturday, we still managed to enjoy the sites and cover a good chunk of the area on foot. 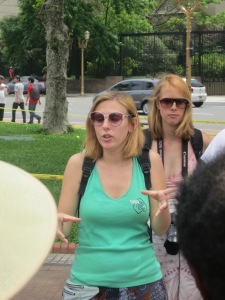 The first thing we quickly learned on our tour is that Portenos – residents of Buenos Aires- absolutely love protests, marches and demonstrations. The protests are almost always peaceful and somewhat well organized, but they are also nearly non-stop. Brooke and I have already seen half a dozen different groups in action since our arrival and that doesn’t include the permanent encampment of Falkland Island War veterans rooted right next door to the Casa Rosada (the central government’s “Pink House”). We’re likely seeing more protests since our hotel is close to the city center, but were also told that as many as 20 loud, vocal gatherings like these happen each week. What are they protesting? It ranges, but just about every conceivable topic is covered. Yesterday, a large crew was gathering in remembrance of the two year anniversary of the death of former Argentinian President Nestor Kirchner. Given their propensity for protests and their insane devotion to football, I think that the next time Argentina wins (or loses) the World Cup, the only calm place to be around here is Uruguay. Speaking of football, there is a “Superclassic” match today between the city’s two top teams that is the biggest thing happening in town. Every television in town seems to be tuned to the game. 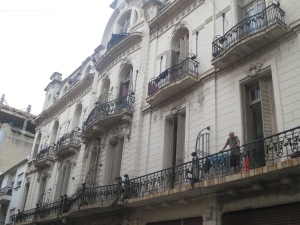 Over the course of the walking tour we were able to take in some of the Bueno Aires architecture which is a blend of Italian, Spanish and French influences. The city, which just celebrated its bicentennial, has tons of grand 19th century buildings and homes, many with grand balconies. Our tour led us through some of the small green spaces that are scattered throughout town with adjoining fountains which only function sporadically. BA even has its own, iconic towering “oblesico” monument built in the 1930’s that does a good impression of a mini Washington Monument. 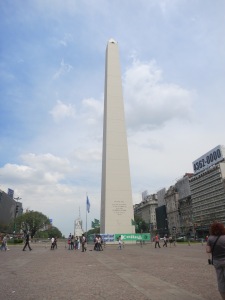 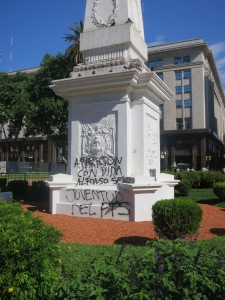 Sadly, the Obelisk, like several of Bueno Aires’ old, grand moments and statues, is placed well behind fences. It’s a shame, but given the excessive graffiti found throughout the city and the number of homeless looking for a place to sleep, it’s clear why they are there. So far. we’re actually seeing more graffiti in Buenos Aires than we’ve seen in almost any other city. Everything from banks to subway cars to historic buildings are tagged. What makes the vandalism unique is that it is often comprised of phrases rather than images and it is almost always political in nature. Another way to protest? Perhaps, but it is ugly. Yesterday we saw a cross walk where even the white painted strips were hit. From city to city, we’ve seen so many otherwise nice buildings ruined by spray paint. About three percent of it is captivating, quality art, but the rest just makes a place look trashy. We’ve come to the conclusion that whomever invented spray paint should be strung up by their toes and whacked by pillows repeatedly.

Overall, it was a great tour of the area. Virgina even told us why the Pink House is painted pink. (Spoiler: no one really knows why). The tour did end on a bit of a uncomfortable note as a creepy, drooling homeless dude followed closely behind members of our tour group at the obelisk plaza. It’s hard to ignore the significant homeless and poverty issues prevalent throughout the city. Traffic and Congestion also seem to be a persistent issue all over town. In fact, we learned during our tour that due to the lousy traffic, the president flies into the city by helicopter every day from her house outside of town. Brooke then pointed out that she could just live in the city, but I seemed to be the only one to think that was a good idea. 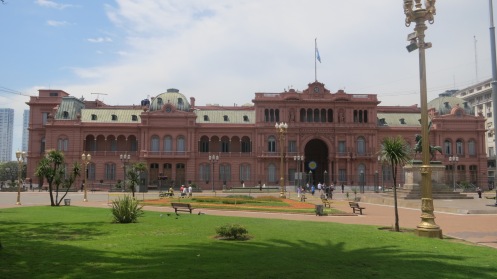 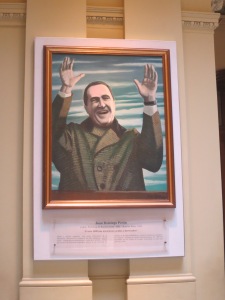 After the tour, Brooke and I found ourselves meandering down one of the pedestrian streets looking for lunch. Along the way, we bypassed a surprisingly large number of Burger King’s and McDonald’s. In fact, I’ve been so seeing many Mickey D’s and BKs that I’m starting to think I’m seeing the same location twice. Later, we took the free tour of the Casa Rosada. Lovely building, but most of it was partitioned off since it’s a functional government building. We spent about 15 minutes trying our best to translate the biographies under the portraits for famous Central and South American leaders. 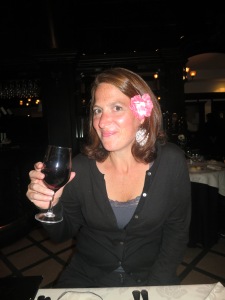 But enough sight seeing! Later last evening, the time had come do to what everyone who visits Argentina must do: Tango! Well, we’re not actually going to Tango (classes come later this week), but we did attend one of the iconic shows and dinners at El QuerandiEl Querandi – one of many old Tango Halls in the city. It was a great experience and a rare treat to have a nice, full night out. Over a tasty dinner of empanadas (I just can’t get enough empanadas), steak and flan, Brooke and I marveled that after all this time traveling, we still haven’t run out of things to talk about or gotten tired of each other’s company. I’d say that bodes well for our life together. 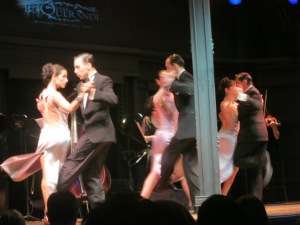 The show itself was entertaining and fun. A live four piece band walked us through the history of tango while the numbers alternated between traditional tango singers and impressive tango dancers. Taking in a dance performance isn’t usually on the top of my list, but these guys were good. We preferred the dancing to the singing, but it was a wonderful show all around. The meal came with a couple of bottles of wine which also were rather wonderful. We’re getting a head start on our guidebooks advice to enjoy at least one bottle of wine per day while in Argentina!