As we trek onward through Argentina, we’re putting our phenomenal time in wine country behind us and heading back east. Ah, I already miss enjoying a daily bottle of wine. A cheap ride on the city bus took us back into the city of Mendoza. Brooke and I were looking forward to one more day in Mendoza since we liked so much of what we saw the first time around. One of Argentina’s larger cities, the central area of Mendoza is compact, walkable, tree lined and punctuated with several lively public squares teeming with ample green space and functioning fountains. The sidewalks are packed with people on their way to school and work or, in the evening, leisurely ambling across town. Toss on the marble tiling found everywhere and the aqueducts running beneath the sidewalk that feed the city and Mendoza is an easy place to like. Returning to endless dinner options doesn’t hurt either. A tasty Italian dinner at a popular favorite restaurant called Marchigiana was a big success. We’ve found quality Italian cuisine is common in Argentina which is no surprise given the amount of Italian heritage found throughout the country.

One last great photo from our time amongst the vineyards 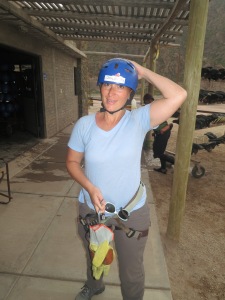 For a change of pace, we headed down to the Avis storefront and decided to rent a car for the day. It’s been several weeks since we’ve had a chance to do any leisurely driving and this seemed to be the right place for it. One insight we’ve gained from traveling is that if you don’t know how to drive a manual transmission car, you’re not going to get very far in just about any country. Lucky for us, Brooke and I are both well versed in the five speed, although the reverse on our tiny Chevy sedan was a bit tricky. One of the primary reasons we rented a car was to scoot out to the Argentina Rafting company outdoor complex about 45 minutes away. Our plan was to tackle a long-standing adventure on our list that we hadn’t had the chance to do yet: Zip Lining! Or, depending on your geographical preference, you may call it Canopy or even Flying Fox. After waiting for a guide, we strapped on our harnesses, hiked up to the start of the course and we’re ready to, er, Zip. Not so far- just about five minutes before we were going to descend down the first line, it started to rain. Then the rain turned into heavier rain. And the heavier rain turned into hail. Nothing says, “you’re not going to be Zip Lining today” like a hail storm. Good thing we had these handy helmets on to protect our noggins from the nasty sky ice. Actually, good thing it started hailing before we started the two hour course. Once you start, there is no where to seek shelter between each zip line. 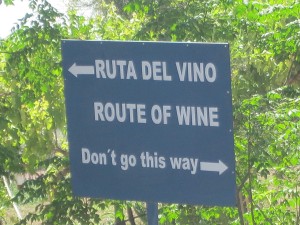 Undaunted and not discouraged, we hopped back in our rental car and began the scenic drive past the foothills of the Andes and back into Mendoza. We wandered a bit and even found ourselves in a local Wal-Mart stocking up on snacks. Sad to report that an Argentine Wal-Mart is identical to an American Wal-Mart. Our car made it’s way to an extraordinary nature reserve/city park north of the city that offers everything from soccer fields to golf courses. I even managed to sneak in a quick park nap on a bench near the lake. Later, we found ourselves enjoying a late lunch at an outdoor cafe in the center of town. Over afternoon coffee, sandwiches and even more empanadas, we allowed ourselves to wonder what we’ll be doing two weeks from now. After this trip is over, we have a lot of unknowns and another big adventure waiting for us. Even though it likely won’t include afternoons at outdoor cafes, it should make for an exciting and remarkable time.

After re-fueling and returning the car, a small slew of logistical challenges in their own right, we made our way back to the Mendoza bus station and prepared for another comfortable 14-hour bus ride back to Buenos Aires. And I think that this bus was a little bit newer and nicer than the last one. Really, anyway you slice it, these are high quality buses. The overnight ride was comparable to the easy-going trip out that we wrote about last week. Although the morning traffic getting into the center of Buenos Aires was brutal and seemed to last forever. 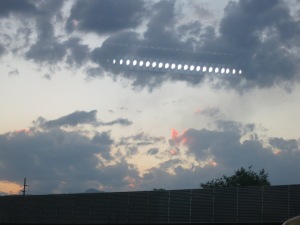 Sunset view from our bus 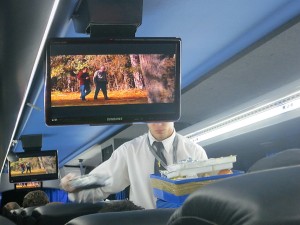 The one constant on both of our bus rides? Terrible, terrible movies. Films so bar that we never heard of any of them. I kept hoping and hoping that the next flick the bus attendant was going to pop on would be a box-office smash. Or at least enjoyable. Instead, each film was worse than the one before. And with a screen a few feet from my head, there was no escaping. The first film was “A Little Bit of Heaven” – an obnoxiously adorable Kate Hudson movie that started out like all Kate Hudson movies. That is until Kate Hudson gets a terminal case of cancer and spends the rest of the film dying with dignity and grace. The second movie was “Get The Gringo” a 2012 Mel Gibson movie that might have been the most brutal and violent movie I’ve seen in years. Not so much suitable for a public bus ride, but I’m more stunned that they are still letting Mel Gibson make movies. The last film was “Fireproof” an independent starring former heart-throb turned evangelical actor Kirk Cameron. It was in Spanish, but I got the gist: small town Fire Chief spends a lot of time crying and being angry about his failing marriage until he accepts Christ’s understanding. Awesome. The Avengers it was not.

After a brief stop in Buenos Aires our next stop is the beaches of Mar Del Plata! Can’t wait to check out another Argentine town.

4 thoughts on “Back through Mendoza”