Budapest continues to impress.  As we mentioned before, we wish we could spend more time here, realizing we cannot possible see and do everything on our list.  During our last full day with our friends, Gina and Tom, we managed to balance seeing some interesting sights with spending quality time together.  It was a really great day! 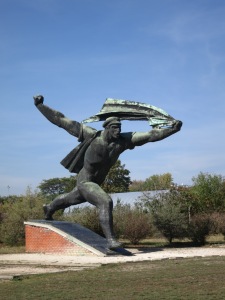 We began our morning by heading to Memento Park, the new home to communist-era statues which formerly filled the streets and city center of Budapest.  When the iron curtain fell, so did the many of the monuments which had been erected by the former dictatorship.  Great debate ensued among the people of the city about whether they should destroy these reminders of their terrorized history, or if they should use them as memorials of an important piece of their past.  They decided on the latter and created Memento Park.  Originally, we thought this would be a sort of “statue graveyard” for these communist era relics.  On the contrary, great thought and consideration was put into the design and organization of this museum.  I call it a museum, because that is a much more accurate term than park for this collection of sculptures.  Our tour guide led us between the statues, discussing their historic significance and their importance in perpetuating communist ideology.  Along with the standard statues of Lenin and Marx are the bronzed boots of Joseph Stalin.  His mammoth likeness was actually torn down by the people during the 1956 revolution against the Soviets.  Stalin’s statue was cut at the knees and torn into bits by the people.  All that remained on the pedestal were his boots, and although the revolution failed, the rest of his body was never replaced.  One statue we found particularly captivating was that of the “Liberating Soviet Soldier.” It stood atop a 7 meter high platform on a hill which overlooks the city.  Its mammoth size is intimidating, especially imagining it in its original environment.  This was also knocked down in the 1956 revolution, but unlike Stalin, this statue was quickly replaced with an exact replica in 1958.  After all, the city could not be left without the protection of this Soviet soldier! 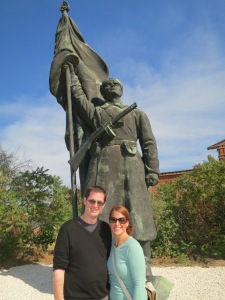 The guided tour fascinated each of us and we left with a much greater understanding of Hungarian history and the nuances of life under a communist regime.  The museum also had an indoor photography exhibit chronicling the rise, reign and fall of communism throughout Eastern Europe.  This part of the museum featured training tapes of the secret police.  More than 100 training and feature films were produced between 1958 and 1988 which trained secret police in state defense methods.  In 2004, these tapes were edited into short documentaries showing the methods used to spy on “traitors”, and their recruitment methods.  I was particularly surprised to learn how many agents of the secret police were forced or blackmailed into service.  I could have easily sat and watched these films all day.  They offer insight into a part of history which was historically a great mystery.

When we finished with the museum, we headed back toward the city center. (The museum sits in the outskirts of the city to discourage lingering hostile sentiment and any temptation to vandalize the statues.)  While we searched for a certain Thai restaurant for lunch, we discovered Great Market, Budapest’s largest market selling all kinds of gourmet foods from meat to paprika to honey and everything in between.  They also had a huge selection of palinka, the potent drink we sampled earlier in the week.  No matter how hard we tried, we couldn’t convince Gina to invest in a bottle.  We didn’t even know this market existed before accidentally discovering it.  We window-shopped the wares for a while before heading down the Vaci u., the pedestrian shopping street which leads the way back to our hotel.  As with all big cities, wading through the cheap touristy souvenirs to find something of value is challenging.  We came up mostly empty handed, though there is a pottery shop I may head back to tomorrow.

Since it is our last night in Budapest together, we decided to get a delicious and traditional dinner at a nice restaurant.  Our hotel concierge recommended Rezkakas, a fine dining Hungarian restaurant not far from or hotel.  The combination of hearty food, Hungarian wine and wonderful friends made for a perfect evening.  Gina and Phil both started with a small bowl of goulash.  After all, what’s a trip to Hungary without goulash?  We discovered that contrary to the heavy, noodle-centric stew some of us are used to, goulash more closely resembles a beef vegetable soup and is suitable as an appetizer.  The entrees did not disappoint and we even had room for a little dessert!  After dinner we headed back to the hotel where we shared drinks, laughs and plans for our next international adventure together.  We are so pleased that Gina and Tom were able to come to Budapest, and we all agree we could not have chosen a better city for traveling together.

Now, Phil and I are back to being a twosome again, but not for long.  After one more day in Budapest and another day of travel, we will meet up with our friend, Jack, in Dubrovnik, Croatia.  We are looking forward to seeing him and hearing about the adventures he’s been having in Turkey.  Until then, we spend will spend our last day in Budapest doing nothing.  Or everything.  Whatever we want! 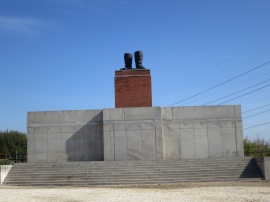 All that remains of Stalin’s statue–his boots. 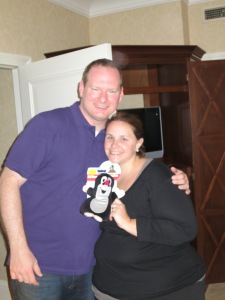 Gina and Tom with Krtek, the European answer to Mickey Mouse.

Statue of liberating Soviet soldier shaking hands with a Hungarian man . Locals say the  Hungarian is using two hands so he doesn’t get his watch stolen.