Posts Tagged With: Toe in the ocean

Sunrise on our final day in Argentina

Given how far South we currently are in relation to the rest of South America and also factoring in the time of year, there are some long days here in Mar Del Plata. Lots of daylight over the course of any given day. All of that made it even more challenging when we pledged to wake up and catch the sunrise this morning. We set the alarm for the official daybreak time of 5:30 AM, but in all honestly dawn starts lighting up the sky around 4:45. Somehow, we managed to drag ourselves out of bed and onto the balcony by the magical, early hour. Facing due east, we were able to watch the sun quickly rise right across the horizon on schedule. Moving from a slight sliver to a full glowing sphere in just a few moments. Sort of spectacular. Ocean view sunrises aren’t something we will have much opportunity to take advantage of moving forward. We’ve managed to see several sunsets during our trip, but this one was the first sunrise. I know it’s just a sunrise, but it was magnificent all the same.

Thus began the final, full day of our Around the World Trip. An easy going day overall. I finally stuck my toe in the ocean – oh so cold. Long walks around Mar Del Plata followed taking me to the cute and charming Guemes street. Another run in with a Post Office complete with long lines, difficult staff and overpiced ($3!) international post card stamps. Sweet Cliff Claven, I’ve come to loathe all post offices. Later on, I contemplated the gravity of the end of our trip at lunch while a plate of empanadas stared back at me. We’ll have more comprehensive trip reflections in future posts (oh, there is much to say), but as we wind down the trip and prepare to head home, I have a general feeling of accomplishment. I feel really good about things. Although, there are some clothes that I’ve been carrying around since July that I never want to see again. It also might be a sign of apparent good timing to head home as I just ran out of shaving cream this morning and I managed to pack exactly the right number of razor blades. On a more meaningful scale, I really hope that Brooke and I managed to expand our horizons and maybe, just maybe, grow a bit as travelers and as people.

Less stunning was the challenge we had with the local bus company later in the day. We rode all the way on two buses to central bus terminal where there, and only there, we could purchase a bus pass card. After interacting with the two most bored information booth employees I’ve ever seen (never a good sign when you have to wake one of them up), we thought we were all set. It wasn’t until we were headed back home boarding another bus that the driver yelled at us in Spanish that the card is not good. Apparently, there are separate bus companies in Mar Del Plata running different routes. Awesome. We bought a card we’ll have little use for. In hindsight, there were some clues that the 221 bus might not operate the same way the 581 bus does, but it would have been incredibly kind of anyone to have clued us in along the way. It’s actually reassuring to know that in our last days of our trip, we’re still getting bamboozled from time to time. Running into these small and ridiculously frustrating issues is all part of the package deal. It would be kind of shame if we had mastered world travel in a matter of a few months.

We closed down the day with one last, delicious, romantic Mar Del Plata dinner at a top local seafood joint named Alito. We’ve been in Argentina for a while now but we just can’t get the hang of eating out at 10:00 PM. In fact, when we sat down to eat at the reasonable dining hour of 8:15 PM, we were the only patrons in the entire restaurant. More guests showed up soon after, but they were mostly of the elderly persuasion. For a while, it felt like we wandered into the equivalent of the Early Bird Special. Luckily, this didn’t have any impact on a scrumptious meal that followed. Our dinner was bookended with a bottle of one of our new favorite wines from Mendoza (The Trumpetter Malbec, if you’re keeping score at home) and two over-the-top desserts. Brooke’s dessert that involved Baileys, ice cream, walnuts and cookies was served in a cocktail glass. There was a dish on the menu called Flan Solo that Brooke joked should be served with Luke Piewalker and C3POreo. Yeah, I’ve got a damn clever and funny wife. This trip has been made up of several wonderful moments spread across the globe and this would count as one of them. We toasted to our time in Argentina and enjoyed a nice, intimate, slow meal as is the style around here. 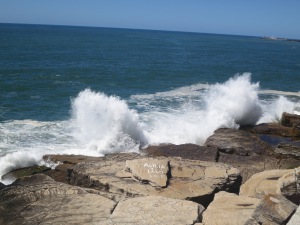 Now, I’m going to get back to enjoying one last morning of seasside living. One of the nicest things about being here has been simply looking out the window and watching the waves crash into the giant rocks far below. Additionally, given how many hotels, apartment buildings, hostels and homes I’ve seen that are blocks from the beach, we’ve been so lucky to have this place. Having been through so many places (often for just one or two nights), and now having all these days in just one apartment has felt like a pleasant eternity. All we need now are some comfy pants and slippers. Soon enough, I suppose. Next stop, a bus to Buenos Aires, another bus to the airport, a flight to Atlanta and a final flight to Cincinnati, Ohio, USA.

Of all the currency we’ve encountered, Argentine peso bills are often ratty and tattered. This was my change from lunch today – the bills are falling apart!

There are commonly found at traffic lights in Argentine cities: Street Entertainers that perform for stopped cars in order for tips. This kid was a pretty fierce juggler. 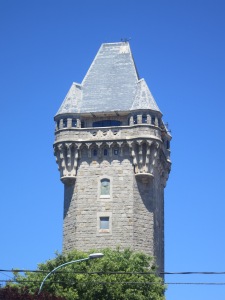 This is a water tower designed to look like a medieval tower at the highest point in Mar Del Plata. Free to get in, but it was apparently closed for the day so this is as close as I got.