The number one benefit of purchasing the seven day Japan Rail Pass (that we mentioned earlier) is that it has allowed us to ride all of the JR trains including the famed Shinkansen (pronounced like “Wisconsin”) AKA the bullet train. Talk about a wonderful, lightning fast way to trek through Japan! We knew it would be a speedy ride, but Sweet Sassy Molassy! That train is fast! Amtrak’s Acela service crawls in comparison.

A sensational, practical, relaxing and enjoyable way to travel, the Shinkansen rail network spans the islands of Japan from tip to toe providing the fastest, smoothest and among the most comfortable train ride that I have ever enjoyed. Shinkansen service is near legend in Japan and it’s easy to see why. These trains are a technology and transportation achievement that should have other countries drooling.

The Shinkansen trains themselves have a fierce and futuristic look – even though the trains have been around for years and years. Their signature look embodies speed. Each sleek car is white with a signature single blue line that streaks down the center of the outside. These aerodynamically shaped trains are also considerably longer than most other trains I’ve seen with some running up to sixteen cars. Each train can hold over 1,500 passengers; when they pull in the station they seem to keep going and going. The interior is equally as nice: comfortable quiet cars, and reclining seats. They are very clean trains with attentive in-seat service from an ever-bowing crew. In that regard, we’re starting to expect nothing less from the Japanese! And there are just so many Shinkansen are on the schedule running each day! The frequency is surprising: wait ten minutes in a station and you might see a half dozen Shinkansens zoom through. It’s a little thrilling each time one roars into the station.

But above all else, it is simply a wonderful way to see the country. Sit back, tilt the chair a bit, and gaze through the oversized window. And these suckers are fast and getting faster. Each generation of engines are apparently a touch speedier than the previous. Speeds of up to 180-200 MPH makes looking out the window a little challenging. Traveling at this new speed, closer objects are hard to focus on before they are out of sight. We rode the Shinkansen from Tokyo to Kyoto and then Kyoto to Hiroshima and finally back to Tokyo. It would have been great if we had just a smidge more time to head north, but that’s becoming our mantra lately: If only we had a bit more time!

But buyer beware – these Shinkansen tickets can be expensive! That handy-dandy Japan Rail pass included our fees, but we estimate our three train tickets could have cost upwards of $500 each. The costs seem justifiable when you start to add up all of the infrastructure that must have been required here. Riding the line on elevated tracks (no ground level track-crossings here), curves on a very small grade, and through endless tunnels & bridges, it breaks my four-function brain calculator to add up what the infrastructure demands must have been. And it looks like it is paying off- most trains we rode on were sold out and it seems to be the preferred method of travel through the country. Who needs airports when a Shinkansen stop is likely a short jaunt from your home! Hmmm…I wonder if there is a Shinkansen route that will take us to the top of Mt. Fuji tomorrow? Man, what a cool ride. 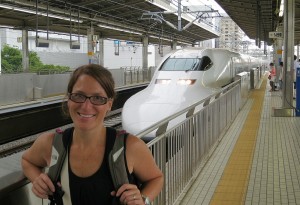 One day in Guangzhou

Note: Apologies for the delay in getting this post live, but it seems that China blocks access to the wordpress site. Interesting, no? We’ve landed in New Zealand and we’re catching up on a few posts now.

In the weeks leading up to this trip, we knew that we would run into our share of surprises along the way. All part of the travel experience. Still, we didn’t expect to fall into the very cool and astounding turn of events that we found ourselves in on our very first day overseas.

We had been debating and struggling with how to spend our 18 hour layover in Guangzhou (pronounced Guang-JO, not Guang-ZOW. It took me way too long to get this right). Lo and behold, it tuns out that a standard best practice among airlines (at least for China Southern) is that for flight itineraries that include layovers of 14+ hours, the airline will put passengers in a hotel room on their dime during the layover. In all the research we did and of all the people we talked to, this never came up. So, that came as incredibly pleasant shock at 6:30 AM this morning! particularly after arriving in steamy Guangzhou from a cross-Pacific flight when all we wanted was a shower and change of clothes. Turns out that instead of slogging around the international terminal, the day was filled with relaxation, a big lunch, naps and showers. Not exactly a back-breaking, rough layover.

Our first long-haul flight arrived with ease and triumph this morning. As Brooke wrote, riding in Business Class made for some sensational travel. The time on the plane qualifies as “super comfortable” and was even easier than anticipated. Sleeping soundly for seven hours doesn’t hurt. And the flight attendants were always brining you SOMETHING. A towel, a mint, coffee, etc. Now we have a solid base in which to compare our other long haul business class flights from other airlines. The bar has been set pretty high. Also made me realize that I would dig doing more/some/any! international business travel in my next job. We disembarked from this insane luxury and began our first of three visits over the next eight weeks to the Guangzhou (CAN) airport.

After walking to the China Southern Transfer Counter, the agent confirmed what we had been told in Los Angeles – since our next flight was so much later in the day, the airline would be happy to book a hotel for us. We asked them to confirm this like five times – partially because the langauge barrier made things a little murky and partially because we were incredulous and filled with glee-inspired amazement. We made a quick pass through immigration and customs where our near virgin passports received their first passport stamp of the trip. We swapped travel stories and made some affable new Australian and New Zealand travel friends as the airlines rounded up a few other business class travelers. Although the hotel option is available for all travelers, an agent eventually walked us across the street to the sensational Pullman airport hotel. The fine folks at Trip Advisor indicated that it is the 13th best rated hotel out of 1,800 in the city (!) and the rooms run about $125. It was one last, heretofore unknown perk of the business class ticket.

So, on day one in Asia, we stayed in what will likely be the nicest hotel that we’ll see for weeks. Brooke and I spent a fair amount of the day in awe. Walking around and checking out the giant lobby, oversized pool tables and snooker table (confession: I thought I knew what snooker is, but apparently I only have a vague notion), the self-playing piano and more. The hotel room was nice with a capital Niiiiiice. Complete with comfy robes, slippers, comfy beds with giant, head-melt-right-in pillows the size of Smart Cars. There was even a yoga mat in the closet. One of the nicer touches is that the bathroom opened up to the main room via a giant glass window that could be closed off by a giant mechanical shade. Handy for the two showers that we each took. Given the undeniably hot climate, Brooke was particularly appreciative of the ice-cold AC. The bottom line is that it this was a really nice hotel which we didn’t expect. We probably should mention that we almost blew every fuse in the hotel when Brooke plugged in her hair dryer, but that was an almost predictable debacle and it all worked out with electronics in tact. 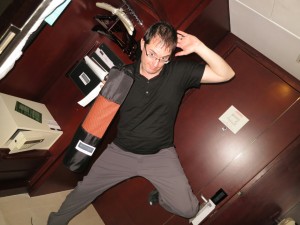 We even managed to have a bit of an indulgent lunch at the Vegas-style hotel buffet between giant nap #1 and super-sized nap #2. We slept incredibly well on those lay-flat beds on the flight last night, but the jetlag is really starting to kick in. When dawn broke this morning, I had no idea what time is was back home and wasn’t even completely sure that it was (apparently, it was Wednesday). Time guru Brooke predicted and then confirmed that we were exactly 12 hours ahead of Eastern Daylight Time. In fact, from this point forward for the rest of the trip, we’ll be anywhere between one and fourteen hours ahead of East Coast US Time – getting closer and closer in sync as we continue to travel east.

Have I mentioned that this is all amazing? This is amazing. It just keeps getting better. It really does. Only a couple of days in and I’m getting a kick out of being on this incredible journey spanning some significant distances.